Tariff: A tax imposed on imports.

Subsidy: financial assistance to a business by government to make it competitive or prevent collapse.

__Protectionism: __policies to protect businesses and workers in a country by restricting /regulating trade with foreign nations.

__Foreign Direct Investment - __a TNC makes an investment into another nation’s economy to build new facilities or to merge with existing firms there.

Free-trade: a policy where a government does not interfere with imports or exports by applying tariffs, subsidies or quotas.

Privatisation: transferring ownership of a public service/agency/property into private ownership run for profit

Neoliberalism: a political philosophy of free markets, free trade, privatisation and increasing the role of business in society (while decreasing the influence of government). It is thought that by making trade easier, there will be more of it, meaning wealth and reduction of poverty.

Political and economic organisations are bodies that are set up to control and oversee international agreements. For example, the World Bank, IMF and WTO introduced free trade and now help to develop countries. They oversee FDI agreements.

This organisations primary purpose is to ensure the stability of the international monetary system, increase living standards and alleviate poverty

Institutions in the United nations system and were both created in 1944 – they regularly work together to assist member countries in funding and as a world bank.

Also known as the “Fund,” was conceived at a United Nations conference convened in Bretton Woods, New Hampshire, United States, in July 1944. Now has 187 member countries

All European Union countries are members, and it has applications from Iran, Iraq and Syria. (However, Algeria joined GATT in 1987 – and still has not agreed terms)

Has headquarters in Geneva, where it settles trade disputes between member states

Provides low interest loans to developing countries and advice to member states, acting as a bank. 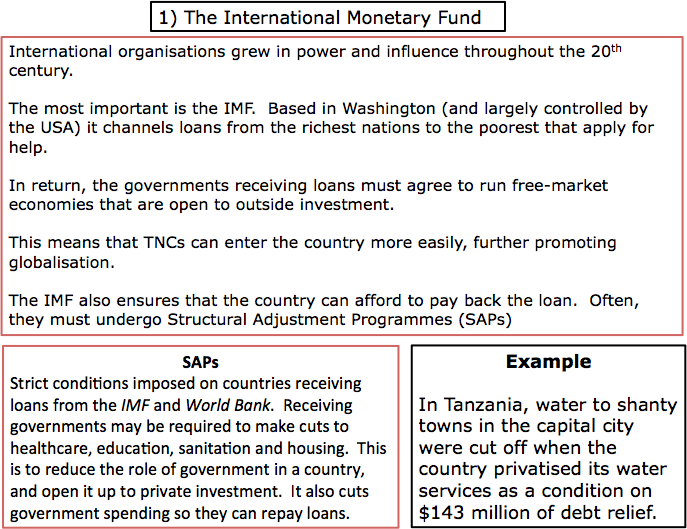