A drainage basin is a __subsystem __within the global hydrological cycle

Defined as ‘the area of land drained by a river and its tributaries’.

A drainage basin can be any size.

The drainage basin in an__ open system.__ 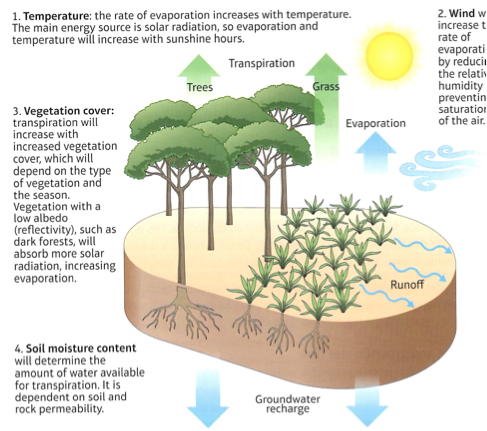 It has inputs, fluxes and outputs.

Inputs in the drainage basin:

Outputs in the drainage basin: 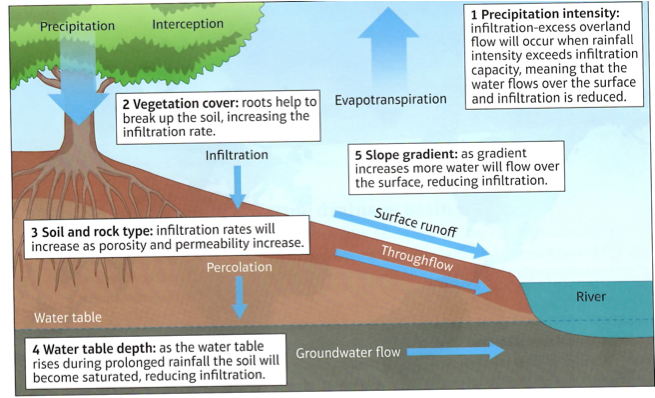 Explain what a drainage basin is
Your answer should include: Local cycle / tributaries / area /

The only input into the drainage basin system is precipitation.

Each drainage basin can have different types of fluxes.

This is when water is__ stored in vegetation. __

Different types of trees have different interception capacity depending on the __size of its leaves __and this can vary throughout the year depending on whether a tree is deciduous (when a tree loses its leaves during the winter) or not.

Some deciduous trees have half the interception capacity in winter compared to summer.

This is when water soaks in soil.

Some soils absorb more water than others.

The amount of water soil can absorb is called ‘infiltration capacity’ (this is measured in mm/hr).

• How much water it already has in (antecedent soil moisture)

• Soil texture and compaction (this influences how porous the soil is). How can agriculture link to this?

This is the main way that __water reaches the river channel. __

Rainfall is so intense that it doesn’t have time to percolate or infiltrate the soil.

Alternatively, it can happen when the ground is too impermeable to allow water to infiltrate.

It travels above the surface, rapidly to the river channel.

A similar process to direct run off, however the causes are different.

This happens when there has been a l__ong period or a period of intense antecedent rainfall __causing the water table to rises upwards.

There is simply to additional space for extra precipitation and it flows overland to the river channel.

It is __slower than direct run off __as it involves a rising of the water table.

What landscapes would this be most common on (consider the relief)?

Soil has natural pipes and percolines __(layers between soil similar to bedding planes in rock) that allow water to __flow horizontally and gradually downslope. This is slower than overland flow but can occur quite rapidly in porous soil such as sand.

A continuation of infiltration.

After soaking through the soil, water moves deeper through permeable or jointed rocks.

Groundwater flow (or base flow)

A constant, very slow movement of water through deep rocks. This maintains a steady level regardless of climatic conditions.

when moisture is lost directly to the atmosphere from water surfaces and soil. This happens as a result of solar heating and air movement therefore evaporation occurs most rapidly in warm, windy and dry conditions.

Albedo- a measure of the proportion of solar radiation that is reflected back into space.

Minute pores in plants allow water to be lost into the atmosphere.

the combined effect of evaporation and transpiration.

This is the most significant and important way in which water is lost to the atmosphere.

In arid and semi-arid places almost all precipitation experiences evapotranspiration back into the atmosphere.

the amount of water loss that would happen if there was an unlimited support of water in the soil for transpiration by vegetation.

Humans also play a significant role in influencing these processes.

In 2015, in the Brazilian city of São Paulo, home to 20 million people, and once known as the City of Drizzle

The total amount of freshwater on Earth comes to about 10.6m cubic km.

Combined into a single droplet, this would produce a sphere with a diameter of about 272 km. However, 99% of that sphere would be made up of groundwater, much of which is not accessible.

By contrast, the total volume from lakes and rivers, humanity’s main source of fresh water, produces a sphere that is a mere 56 km in diameter.

That little blue droplet sustains most of the people on Earth – and it is under increasing assault as the planet heats up.

Changing precipitation and melting snow and ice are already altering hydrological systems in many regions. 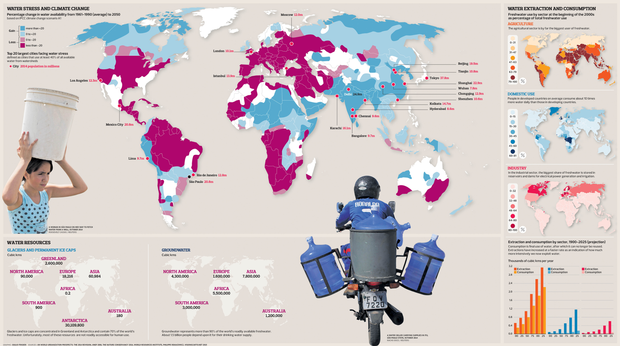 Importance of Human or Phyiscal Interference

When humans influence the cycle they can alter the fluxes significantly by speeding up or slowing down processes.

Physical changes would be changes in the amount of precipitation as an input.