What is a Coast?

The UK’s coastline is 31,368 km long (if you include all the main islands). It varies enormously from tropical looking Luskentyre in the Outer Hebrides, to the jagged coasts of Cornwall, from the low lying muddy estuarine coast of the Wash, to broad sandy beach and dunes at Bamburgh in Northumberland.

Coasts can be classified in a variety of ways, depending on:

Their geology – which can relate to rocky, sandy and

The Tees-Exe line is an imaginary northeast-southwest line that can be drawn on a map of Great Britain which roughly divides the country into lowland and upland regions. 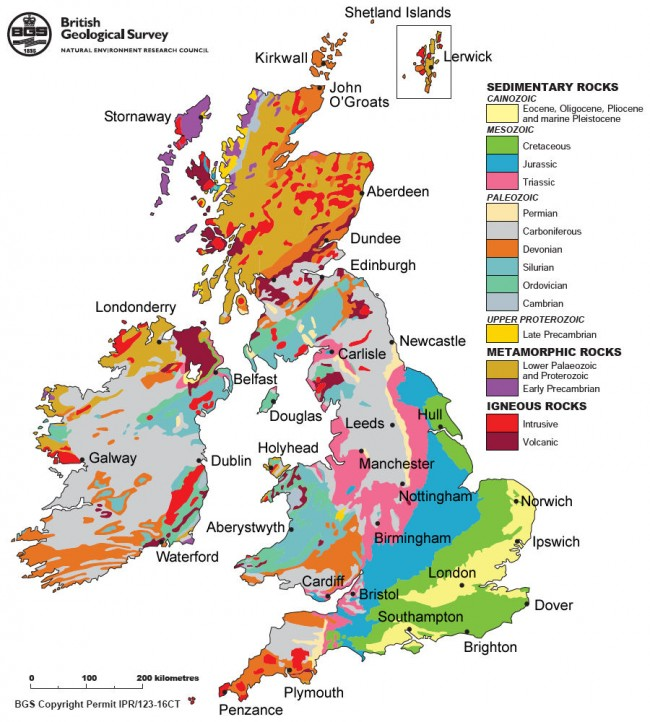 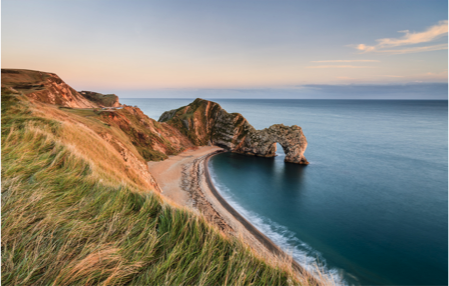 This rocky coastline of igneous granite/basalt can withstand frequent storms with little erosion. It also has compacted older sedimentary rocks (such as old sandstone) and metamorphic rocks (slates and schists)

Schist is medium grade metamorphic rock, formed by the metamorphosis of mudstone / shale, or some types of igneous rock, to a higher degree than slate.

Rocky coasts are generally found in high energy environments. These tend to be

Stretches of the Atlantic-facing coasts, where the waves are powerful (large fetch) for most of the year (Cornwall and NW-Scotland)

Made of younger, weaker sedimentary rocks (chalks, clays, sand and sandstone). The Wash area is called a Coastal Plain – low flat relief (20-30km wide) formed by 4 rivers: GreatOuse, Witham, Welland and Nene. It has a range of habitats from tidal creeks to mud flats, salt marshes and lagoons. 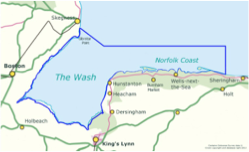 Much of the Eastern England coast consists of low-lying sandy beaches such as the one at Bamburgh, north Norfolk and Lincolnshire.

Sandy and estuarine coasts are generally found in low-energy environments. In the UK these tend to be

Stretches of the coast where the waves are less powerful or where the coast is sheltered from large waves (such as Lincolnshire and Norfolk)Where the rate of deposition exceeds the rate of erosion. 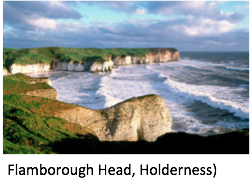 Many coasts are a mixture of high and low energy environments. For example, while Holderness may be predominately low-energy, winter storms can still create a short term high-energy erosional environment.

Also, local geology can also create headlands (such as the chalky cliffs of Flamborough head)

The coast is constantly changing. It is a dynamic system of inputs, processes and outputs.

This is the area between the land and the sea. It stretches out into the sea and onto the shore. It is a zone rather than a line because tides and storms affect a band around the coast. The zone is constantly changing, because of the dynamic interaction between the processes operating in the seas, oceans and on land

e.g. in the short term: due to individual waves, daily tides or seasonal storms

e.g. in the long term: due to sea level changes or climate change

4 sections – backshore and foreshore are most interest as this is where most human activity occurs and where physical processes such as erosion, deposition, transport and mass movement largely occur. 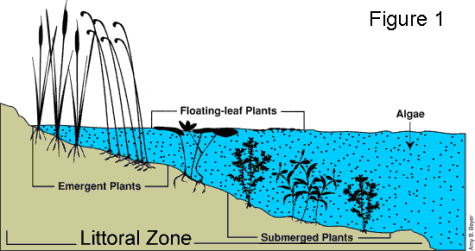 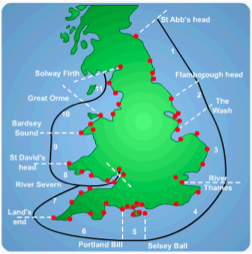 As part of the littoral cell, sediment is sourced by the processes of weathering and erosion. This sediment is then transported and deposited to produce coastal landforms. This system forms Sediment Cells . There are 11 sediment cells around the English and Welsh coasts of the UK. 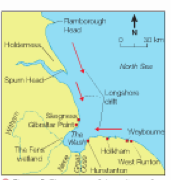 The main source of sediment is form cliff erosion at West Runton & Weybourne to the East of the Wash. Soft sandstone cliffs retreating at a rate of 1m per year.

Some sediments comes from tidal currents which pick up glacial deposits on the shallow sea floor.

Erosion of the soft Holderness cliffs to the North, carried south in suspension.

Sand is carried South along the Lincolnshire Coast.

4 rivers discharge into the Wash.