Monetary Policy is the use of interest rates and quantitative easing to control the money supply. Interest rates determine how expensive it is for businesses to borrow money and the rate of return people earn on their savings. Quantitative Easing is the printing of money.

Fiscal policy is the manipulation of tax and government spending.

To expand the economy the government can:

Use quantitative easing - adding a small amount to the money supply will spark the multiplier without causing inflation.

To contract the economy the government can:

Outlining the role of the Bank of England – IR / MPC

Interest Rates – is the cost that is added on to the cost of borrowing, thisy is also called the APR (annual percentage rate)

Monetary Policy Committee - consist of 9 expert economists who meet every month to decide policies which include Interest rate base number etc.

The Bank of England is responsible for deciding monetary policy to control inflation/economic growth; although it keeps in close touch with the government so that it is favourable for the people. Interest rates is used to control inflation to the desired 2% level. Because the MPC is independent to the Government, they are able to change it whenever they like to but not when an election is due (unless extreme circumstances).

Aug 4th 2016 base rate was 0.25% which to encourage spending to grow AD due to the effects to Brexit as well as recovering from the GFC.

The Bank of England needs the MPC to play around with IR so that it has steady economic growth so that borrowing is not too expensive for the average joe but the bank will get a good return from the loan it has given out.

Outlining the role of the Bank of England – QE

The Bank of England’s job is different from any other banks job as their sole purpose is to nurture the economy for the publics benefit. The MPC (Monetary Policy Committee) decide on the monetary policies for the economy. Post GFC, the Bank of England was tasked with helping the UK economy recover.

After the GFC of 2008, most economies found that conventional expansionary policies didn’t work. The central banks (the Bank of England in the UK) came up with the idea of quantitative easing. This is when central banks buy illiquid assets, mostly government bonds, from banks paying for them upfront in cash. They therefore increase banks liquidity. They do this in the hope that banks then in turn use this money they now have to lend to borrowers. This is monetary policy. The danger of this policy is potential hyperinflation that results. This is when inflation spirals out of control.

Expansionary policies will increase AD thus giving businesses the incentive to produce more which increases sales and therefore profit. In addition to this they will take on more labour to keep up with the demand and as a result will reduce unemployment. With an increase in consumer confidence it would prompt an increase in FDI and will provide a further injection into the circular flow of income. This is very good for example, in the periods of 2012-15 the UK saw this kind of recovery.

In the long run if it is still expanding the result may be an acceleration of inflation. This is due to the high levels of investment and low unemployment meaning businesses find it hard to recruit people they want and therefore would have to compete for people with scarce skills offering higher pay. On the other hand, contractionary policies reduce AD because prices would increase from the reduction of output which could lead to redundancies and an increase in unemployment.

Causes of shifts in Aggregate demand.

Increases in AD result in:

Decreases in AD result in: 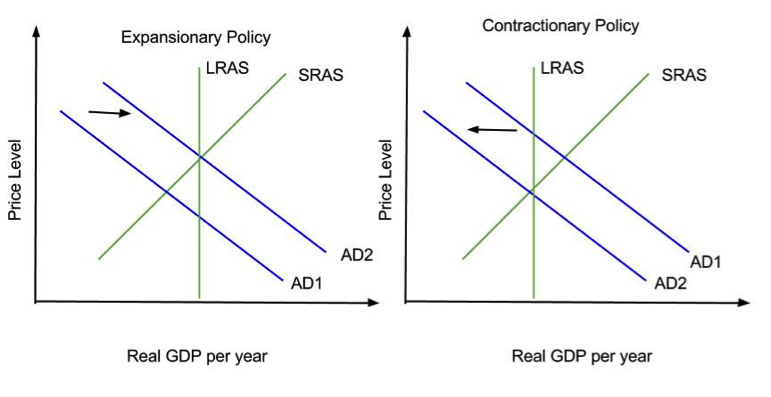 How investment, job creation and economic growth can be encouraged

All of this is associated with economic cycle: they will be observed first in the recovery process and then in a boom.

1.__ Supply side polices__ – may help to increase supply of scares skill by improving education and training.

How inflation and U / E can be controlled

To control inflation and unemployment, both changes in demand-side and supply-side policies are vital. To reduce deficiency unemployment, expansionary policies will be one of the solutions by cutting taxes and increasing government spending. Lower taxes will increase disposable income and increase their consumption which will shift AD curve to the right. If firms produce more, there will be an increase in demand for workers and therefore lower demand-deficient unemployment. However, these policies won’t be effective for structural unemployment, mainly because of time lags.

Structural unemployment usually caused by changing consumer preferences and competition from imports. This will last longer with geographical and occupational immobility. Although, there will be time lags for these policies, but government should help them educated and trained, to enable them to find jobs in long term.

By contractionary policies, it can reduce supply-side unemployment and inflation. This helps reduce spending and borrowing by setting higher taxes and interest rates, which is crucial during inflation, because it helps halt economic growth and bring back to the stable level.

Time lag, there can be a delay between an economic action and a consequence. A time lag can make policy decisions more difficult. Economists estimate interest rate changes take up to 18 months (12—18 months) to have the desired effect on an economy. This means monetary policy needs to try and predict the state of economy for up to 18 months ahead. Therefore a time lag can reduce the effectiveness of monetary policy and fiscal policy. For monetary policy, interest rates are affected, while government spending and taxation are affected with fiscal policy.

Both fiscal and monetary policies influence the performance of the economy in the near-term future. An issue standing in the way of the effectiveness of each of these is the time lag that occurs from the implementation of a policy to the actual evidence of it affecting the economy. Different reasons exist for the time lag, and it creates ongoing issues for monetary and fiscal policy efforts to improve economic conditions.

Strengths and weaknesses of demand-side policies

Demand-side polices are not as fast working as say the supply-side polices that could be used, as they will take time for them to be implemented or take action. Fiscal policy is used to stabilise the economy by adjusting it accordingly.

Fiscal policy is not always the best way of doing this and can easily mislead, because fiscal policy rises aggregate demand it can also lead to accelerating inflation, demand-pull inflation. Expansionary policies sometimes require the use of government funding which will increase the budget deficit, and this could then lead to high interest rates or making borrowing costly, the same can be said for tax cuts which can do the same.

After the recession in 2008 expansionary fiscal policies were not popular as they had spent a lot of money bailing out the banks, and because of this is cause an increase in the public sector deficit. This later caused public sector cuts that did not encourage economic growth.

Hard to achieve low inflation rates together with low unemployment and there will most have to be a trade-off between these two. Between 2000-2006 came very close to this.