The role of small businesses

Although large businesses employ many people, most businesses are small. Large companies are only in their thousands, whilst small businesses are in their millions. Around half of UK output is produced by small and medium-sized enterprises (SMEs, which employ <250 employees). As we have discussed there are many reasons why small businesses exist and thrive. For many products, it is possible for large companies to flourish side-by-side with much smaller ones, as is the case with coffee shops.

Start-up businesses are generally small because they have access to limited funding. An entrepreneur’s own resources will normally be insufficient to fund a large-scale business. Furthermore banks will see starting from scratch on a large-scale as extremely risky. A number of businesses will grow into larger ones (e.g. Bannatyne’s care homes), some will fail and some will be quite successful whilst staying small.

So it is important to differentiate yourself from the competition and attain a USP. A good example is the bread market where 3 firms dominate (an oligopoly – Warburtons, Hovis and Kingsmill). In the past year they had lost 121 million worth of sales due to competitors successfully attaining product differentiation and USP, thus stealing market share. People seem to be eating different types of bread, but also as incomes grow again people are choosing to eat more alternatives to bread.

Artisan bread is different (the jury is out on whether it is tastier, better for you or longer lasting). Being different will appeal to some consumers – thus attaining product differentiation is important. The fact that ‘artisan bread’ is more expensive is not necessarily a disadvantage as it can sometimes provide a USP. Being handmade is also a useful USP (e.g. jewellery). There are many ways for small firms to differentiate successfully, creating their own markets. Thus product differentiation/developing a USP can enable a small firm to successfully compete.

Large businesses are vulnerable to diseconomies of scale (2.1.1 recap!) due to communication/co-ordination/morale problems. Smaller firms are more flexible – they can respond more quickly/accurately to their customer’s preferences. Products/services can be modified to meet unique customer needs. Flexibility can provide a very important way for small firms to compete.

Where demand is limited there is little point in expansion, even if economy of scale (m, t, f, p and mktg) could be available. Small corner shops will always exist and survive for those customers who are too poor to commute to the big players, or perhaps its too inconvenient as well. They also offer convenient ‘top up shopping’ for odd items forgotten on your major shop! Though in the modern day it is believed that the small store has some hidden advantages over the big store. In the developed world, large stores can offer up to 60,000 different items.

Research shows that in MEDCs the average consumer has 22 minutes to shop and we simply can’t see such a vast range of products in that time. Thus the advent of the ‘express store’. After years of steady growth in retail store size, in 2007 the average size of a US grocery store dipped slightly. We seem to prefer smaller stores with a more personal customer service. Another good example is personal trainers versus mass produced ‘fitness DVDs. A personalised customer service can enable small firms to compete successfully.

Some entrepreneurs will choose to stay small, even where there is promising growth potential! It all depends on their entrepreneurial motives and business objectives (1.2.2). Some entrepreneurs want to stay at a level where they can closely control all aspects such as dealing with customers, suppliers and employees. They might see large business as too stressful and don’t value extra profits over control/independence. Some might even be social entrepreneurs!

Many of the points identified here depend of the relationship between client and supplier – a relationship of trust can ‘add value’. From a consumers (and even a business’s!) point of view, the loss of the personalised relationship can outweigh the savings from switching to a larger, cheaper supplier. Many of the largest firms are commonly ranked low in customer satisfaction surveys – thus a closer relationship with their stakeholders can be another way that small firms can compete successfully.

Lastly in relation to demand, there are highly specialised niches catering for minority interests, where the total demand nationally and maybe even globally might be insufficient to allow firms to exploit E of S. For example hobbies such as falconry. There is simply not the demand available to occupy large businesses. Thus small firms can compete in a niche market, where the segment is so small/unique that they remain a small firm.

In closing, some small firms choose to remain small for a reason. In Theme 1 (1.1.2) we looked at business objectives – profit is not the objective for all! Some are happy to be profit satisficing, others to be ethical/social objectives. This is perhaps easier to achieve in a small firm – as the bigger you get the harder these become to maintain, along with divorce of ownership and control.

The very latest figures for the UK grocery sector show the continuation of several trends, from the rise of the discounters and also Waitrose, through to the decline of Tesco and the Coop.

Part of the reason Tesco’s problems have had such publicity is because it’s the market leader – and there’s a natural inclination to assume that dominant companies can cash in on the strength of their position.

As shown in the graph, none of the Top 4 have found things easy, especially since early 2012, when the Aldi-Lidl bandwagon began. It is at least as interesting to note though that the Coop’s decline since 2009 easily outweighs the decline of any other retailer. 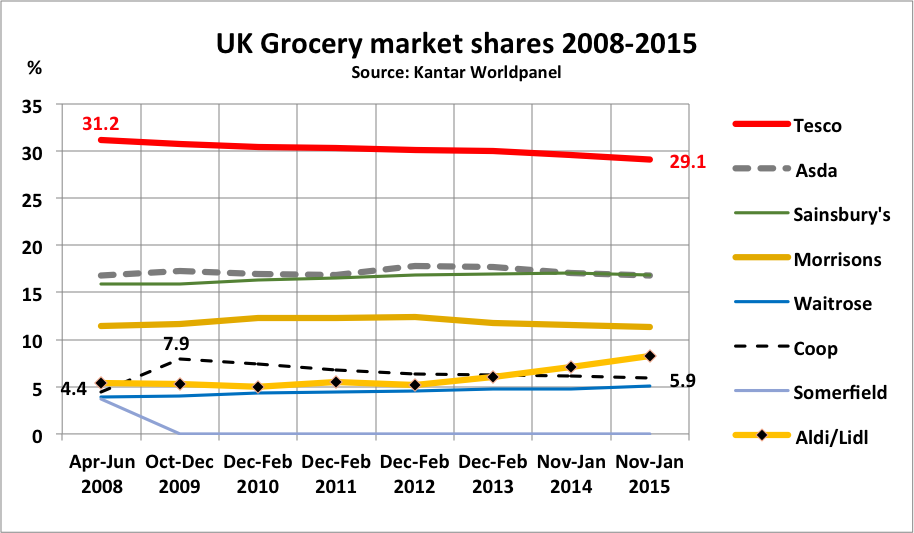 At the time the Coop chief executive Peter Marks said that the acquisition of Somerfield would provide ‘rocket fuel’ for his group’s growth plans. He went on to say that the deal would “create a stronger fifth player in food and a convenience store chain with unrivalled geographic reach”. The Coop also said that it aimed to double its profits over the next 3 years. Its 2007 profit had been £195.5 million, sharply down on 2006’s £360 million.

Peter Marks wasn’t the only person with good things to say about this takeover. Retail experts ‘Verdict Research’ said that “The benefits of this move are that they have a larger scale, and it propels them int_o a different league in terms of food retailing”._

By December 2009 Peter Marks was trumpeting the success of the takeover, proclaiming that “We’ve gone from the second division back into the Premiership. Overnight we doubled our share of the UK supermarket sector.” In mid 2010, however, the Coop half-yearly report cited ‘inevitable disruption’ in the integration process as the explanation for a fall in sales at former Somerfield outlets (now converted to the Coop brand).

A year later and Peter Marks admitted to a 3.4% fall in like-for-like sales across the Coop grocery business, partly due to ‘disruption to store activity’. Nevertheless he claimed to be very confident that the bigger scale of the business would allow successful investment, such as in new software that would provide improved stock management. Despite this optimism, in the summer 2012 he retired as Chief Executive – leaving before the massive financial problems at the business became clear later in the year.

As for the Coop’s attempt to join the big 5 grocers: from a high of 7.9% market share just after the merger, by early 2015 the figure was down to 5.9%. The £1.57bn paid for Somerfield was a waste of money. And how did it all work out for Peter Marks?

__Question 2: __Explain how the Coop’s purchase of Somerfield can be termed ‘horizontal integration’. (4 marks)

__Question 3: __Explain what the Coop might have expected from a horizontal takeover. (4 marks)

__Question 4: __Discuss the motives of Peter Marks in choosing the takeover of Somerfield as the best way to achieve growth. (8 marks)

__Question 5: __Between 2009 and 2015 Waitrose built its market share from 4% to 5.1%, without using takeovers. The Coop spent £1.7bn but without financial success. Assess growth strategies in the grocery sector. I.e., evaluate the approach of organic growth and inorganic growth in this sector - which do you recommend? (12 marks)