It’s important you understand the key economic terms which will be used throughout your theory and writing.

Economy - the production and consumption of goods and services in a country.

Gross domestic product (GDP) - the market value of all final goods and services produced within a country in a given period.

Unemployment - people who are willing and able to work, but cannot find a job.

Balance of payments - the difference between a country’s exports and imports.

Inflation - the increase in the average price level of goods and services over time.

Interest - the extra cost of borrowing money. For example if you borrow £100 at 5% then you will pay back £105 in total.

Exchange rates - the price of one currency in terms of another. For example £1=$1.5US.

The 4 Common macroeconomic objectives are the following, but how can they be achieved? REFLECT!

Gross domestic product (GDP) is defined as “the value of all final goods and services produced in a country in 1 year”.

Gross National Product (GNP) is defined as “the market value of all goods and services produced in one year by residents of a country.”

Inflation is a sustained increase in the general price level which leads to a fall in the value of money.

Inflation is a problem for business because it adds to business costs – i.e. increases the price of raw materials and goods. E.g. oil prices have been and are expected to continue to rise – thus will have an inflationary impact. These will discourage businesses against expansion.

Furthermore, workers wages will not buy as many goods as before. People’s REAL INCOMES will fall. For example if you get a 6% wage increase, but the cost of goods has risen by 10% - then your ‘real income’ has actually fallen by 4%. Workers may therefore demand higher wages – which can lead to industrial relation problems…and there are plenty topical examples of workers demanding a pay rise recently!

The two main ways of counting the unemployed are:

A high unemployment rate is very problematic in businesses:

Thus low unemployment is better for a country and its economy.

EXPORTS are goods and services sold from one country to another, __ex__iting (they bring money into an economy).

Governments will aim for a balance between these.

The difference between a country’s exports and imports is called the balance of payments.

If there is a DEFICIT (imports>exports – money leaving an economy) there will be consequences:

The exchange rate measures the external value of a currency, for example, the sterling British Pound in terms of how much of another currency it can buy.

The daily value of the £ is determined in the foreign exchange markets (FOREX).

The value is determined by the demand and supply.

If lots of people want to buy £ for example, to be able to buy UK goods, then this will raise the value of the £ - i.e. if the UK EXPORTS A LOT!

But the problem is that the pound is used in a fairly small market place – the UK (60 million people). It’s a nuisance for businesses to have to buy foreign currency to buy goods from overseas, or vice-versa. There is often a charge for making the transaction. This is why many large British businesses actually wanted us to join the Euro when it was launched in the year 2000…however in hindsight we’re lucky we didn’t join that sinking ship as it suffers with a lot of uncertainty with the struggling Eurozone economies – e.g. Greece!

In recent times, the pound has fallen in value against the euro, thus we are paying more to purchase the same quantities of goods and services than before.

When any currency’s exchange rate is high, it is cheaper to import raw materials (the £ is worth a lot of US$ for example, thus making American goods cheap for us to buy). It is also good news for keeping inflation (rising prices) down, as local suppliers face more intense competition from cheap imports from abroad – thus will have to cut their costs and keep prices down.

Interest rates, put simply, are the costs of borrowing. In the UK they are free from political manipulation and are controlled in the UK by the Bank of England Monetary Policy Committee. When inflation starts to rise the MPC may raise interest rates to discourage people from borrowing. Why? If interest rates are high it helps reduce demand in an economy and thus bring down demand-push inflation….it’s the law of demand in action for as demand drops businesses start to drop their prices!

However, when the MPC raises interest rates to get on top of inflation this can have an adverse effect on businesses that have borrowed money. How? It raises business costs as almost all businesses will have a variable rate loan/mortgage and it will also hamper demand if you are a luxury product – people will not be taking out loans!

The MPC seeks to set interest rates that help the Government achieve it target of keeping inflation at the 2% level.

Mixed economies (i.e. both the public and private sector determine the allocation of resources) are the most common economic structure for modern economies, meaning governments have influence on business activity.

How can the benefits of business activity be encouraged whilst controlling or stopping the undesirable effects?

The answer is changes in the law to promote good business and punish bad business.

Governments try to control business for the benefit of all society and stakeholders – consumers, workers, local residents and the whole community.

If government manages to juggle of these 4 things successfully – they will achieve economic growth.

An economy grows when the total level of output of goods/services in a country increases (i.e. its GDP).

When a country’s GDP is falling, it has no economic growth…..it is shrinking….it is in a RECESSION!

If these four factors start going bad and a country’s economy starts to get smaller – then it is in a recession.

An economy is cyclical – a cycle. 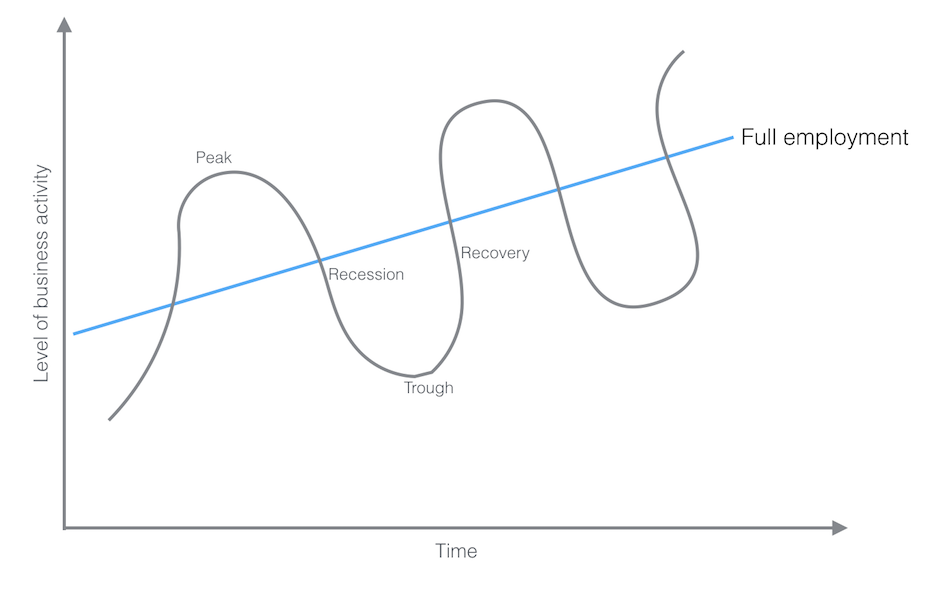 Governments have a great deal of economic power – 40/50% of GDP is raised through taxes!

Business managers need to know how the government economic decisions can affect it – they need to be proactive and see opportunities rather than threats.

The 3 governments economic policies areas are: fiscal, monetary and supply-side.

The government uses this power to try to achieve its economic objectives. Time to check your memory, what are these again?
Your answer should include: Unemployment / Growth / Balance

Governments raise money through taxes on individuals and businesses. What are the main types?

There are a number of different types of taxes:

- Income tax - a tax on people’s income. Progressive – rich pay tax at a higher rate than the poor.

- Value added tax (VAT) - in built into the prices of luxury products (which makes goods and services more expensive).

- Corporation tax - tax on the profits made by a business – usually companies.

- Quotas - a physical limit on the quantity of a certain type of product that can be brought into a country.

__- Tariffs __- used to try to reduce the import of products from other countries, by putting taxes on them.

Governments want to have an efficient and competitive economy. Naturally they want businesses to expand, produce more and employ more workers (this is good for the country as a whole!). SUPPLY SIDE POLICIES are policies that the government has to try to improve the efficient supply of goods and services

- Deregulation – reduce bureaucracy and paperwork that makes business inefficient and adds to costs!

- Privatisation – What is it? When a business is sold off by the government from the public sector, to a private owner in the private sector and competition is allowed to form. E.g. BT It is now very common to try to open up competition in industries and improve efficiency.

- Improving training and education – To improve the country’s skill sets. E.g. The computer industry is now short on skilled staff.

As a teenager, Marvin Burton battled with his weight. By the time Marvin left school he was 16 stone (100 kgs), so he decided to work in the fitness industry to try and help overcome his weight problem. Marvin worked in a number of roles from gym receptionist, aerobics instructor, personal trainer, to the Director of Fitness on a cruise ship – teaching and training over 2,000 passengers!

As an essential part of his professional development, Marvin studied and often undertook training in areas such as sports massage therapy, diet and nutrition and anatomy.

In 2008, Marvin started his own fitness company, Advanced Conditioning Ltd. Although it was a risk and there was lots of uncertainty at the start, he made a success of it. He often worked with professional sports people on a one-to-one basis. Marvin also ran group exercise classes. Since much of his work required him to be flexible, he set up an office at home. When Marvin needed a fitness studio or large equipment for his clients, he simply hired it, often from well-known health club chains, such as Virgin Active.

In 2011 and after 3 years of careful market research and thinking ‘creative destruction’, Marvin spotted a gap in the market. He teamed up with four other self-employed professional sports trainers, a masseur and a chef, to provide exclusive and relatively expensive well-being stay away breaks aimed at the top end of the market. The team, operating collectively as Fitness Retreat Ltd, hire luxury countryside venues such as The Lindens, in Dorset. The Lindens is a fabulous 18th century manor house which has a heated swimming pool, all-weather tennis courts and acres of amazing woodland and gardens – the perfect setting for a great fitness getaway. The market research that Marvin carried out prior to launch suggested that it was these types of facilities that his target market desired. It was after evaluating his competitors on a market map, that Marvin decided to position himself to the high end of the market.

Fitness Retreat Ltd offers its breaks across the UK for four or seven days. Those who attend learn about exercise, nutrition, motivation, recovery and general well-being. The team use well-proven methods to achieve great results in weight loss and fat burn. There have been many happy clients who achieved their targets. One client, sales manager Lucy Adamson, commented: “I wanted to lose two stone for my wedding. I tried for a long time but found it hard. When I started work with Marvin it seemed as though we didn’t have to do all of the things that I was trying. I looked forward to the sessions and the weight came off easily”

Marvin is first and foremost an international fitness educator, working as a consultant to all major health chains and a number of sports clubs. “I call him the Guru, he’s a legend and makes me laugh. I can’t believe how much he knows” said Matt Richards of Derby County Football Club. When business is quiet – which is rare these days – Marvin writes educational material and trains other trainers.

For 8 marks you need to be including 2 agreeing points and 2 however (evaluation) points.Discuss whether or not an increase in unemployment might affect Fitness Retreat Ltd.
Your answer should include: Luxury / Niche / Target / Market / Cheap / Labour
For 12 marks you also want 2 agreeing points with 2 evaluations but also include a conclusion justifying your judgement.Assess the impact of possible changes in government taxation policy would have on Marvin's business.
Your answer should include: Disposable / Income / Profit / Reinvest / Inflation / Change