When there are negative externalities, there is an external cost paid by third parties. However it might be hard to quantify, as are the external benefits. The overall impact maybe valued in different ways by different people. Sometimes, whether or not an externality is acceptable will be a political decision (e.g. nuclear energy).

This would require government intervention on demerit goods (overall negative impact on society) via indirect taxation, thus internalising the external cost (aka the polluter pays principle). Excise duty/sin taxes are classic examples of this. Aviation tax, landfill tax, cigarette duty, alcohol duty are all there to try to eliminate the over-production/consumption of these demerit goods and thus bring supply to the socially optimum equilibrium level. 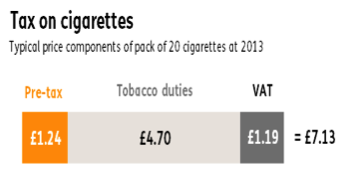 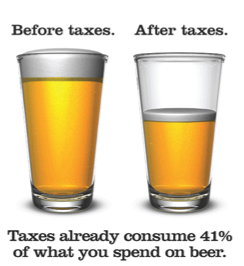 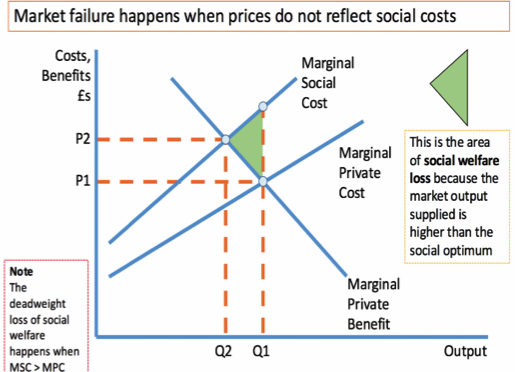 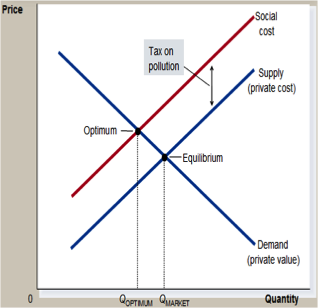 The costs that a supplier will consider - the private costs - determine supply. Therefore, the PC curve is the basis for the supply curve. Similarly, the PB curve determines the demand curve. Neither the consumer nor supplier considers the external benefits/costs. In theory, the equilibrium point should be at the point where the social benefits and social costs cross. In reality, there are either positive or negative externalities and an external benefit which if foregone or an external cost which is suffered (you should know the diagrams by now).

Sometimes external costs/benefits can be clearly identified and are quite easy to value, making ‘internalising the external cost’ easy. E.g. congestion charges in London. However subjective valuations and information gaps can make valuing some externalities dependent on guesstimates or simply impossible. E.g. Obesity, how do you implement the ‘polluter pays’ principle with a fair ‘fat tax’?

In 2006, the Stern Review of climate change for the UK gov said that “the evidence gathered by the review leads to a simple conclusion; the benefits of strong and early action far outweigh the economic costs of not acting”. Although it is estimated that if we are truly environmentally responsible and act towaRds climate change, the economic cost (e.g. of using more expensive renewable energy than fossil fuels) is 1% of GDP per annum.

Can the current gov afford for our economy to contract 1% p.a.?

Looking at the specific consequences of climate change, there are serious and growing problems:

Attempting to value the costs would be difficult, as would apportioning responsibility. It is widely accepted though that greenhouse gases such as CO2 are the main cause and that many emissions result from the use of fossil fuels such as coal, oil and gas.

Rapid economic development in China has resulted in pollution and persistent smog in industrialised areas. The World Bank has reported thousands of premature deaths and incidents of respiratory illness. There has been a serious trade-off of China’s rapid economic growth – their environment.

The awareness of such issues has grown in China, there were some reductions in emissions in 2016. However with the cost to GDP of truly tackling their environmental issues, couple with their economy currently cooling down and some worrying that the bubble might pop, although China are vastly developing their solar cell technology they won’t be shifting from their dependency on coal anytime soon.

When less is produced than would be optimal for society as a whole, given the external benefits of the product. E.g. Gym memberships. 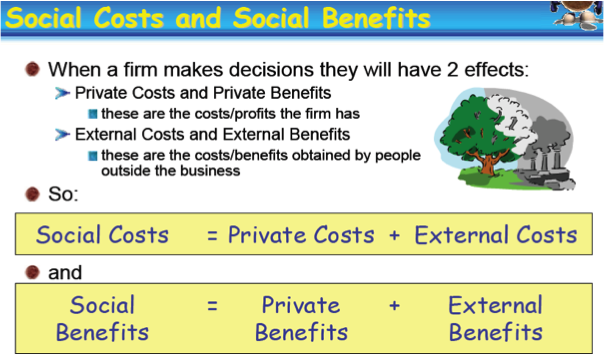 If quantity produced/consumed is less than OA, then the MSB > MSC. Welfare could be optimised if production and consumption were increased

If production and consumption takes places at OB (which it will, for, in theory, firms will always want to supply to the market at the quantity when M__P__B cover M__P__C) then there is a welfare loss to society. The loss is the difference between the MSC and the MPB shown in Figure 3 below. 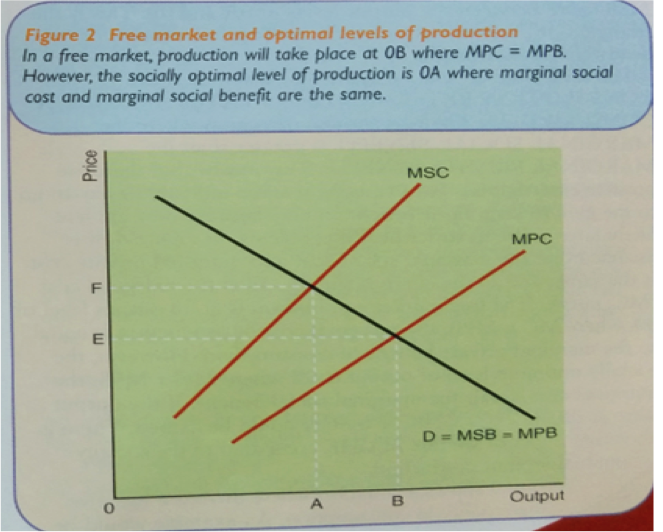 The same analysis can be applied to a situation where the MSB are greater than the MPB at every level of output (Figure 4). This means that there are positive externalities. In these scenarios, we assume MSC and MPC are the same line as there is no external cost. The free market equilibrium point is OA, where MC=MPB. However the socially optimum level is when MC = MSB, at output OB. Again the enclosed triangle shows the welfare that could be gained – GHK is the welfare loss.

When the price paid only covers the private costs only. To ensure a positive externality, the price should cover the private and external cost. If the price covered all the costs, less would be produced as is the socially optimum level – thus the term overproduction. An example of this is cigarettes! 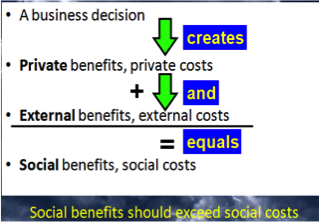 - Externalities include all the costs and benefits that affect people and communities that are neither buyers nor sellers of the product in question. They are economic side-effects, sometimes known as spillover effects.

- Negative Externalities impose costs on society that are not paid for either by the producer or by the consumer. They include pollution, congestion and noise. When EC>PC.

- Positive Externalities benefit people who have not had to pay for them. I.e. positive spillover effects on society of a good/service. E.g. the flu jab reduces absenteeism and raises productivity. When EB>PB.

- Private Benefits are paid for by the buyer. Usually the profit to the business.

- Private Costs are included in the price of the product; external costs are usually not

- External Benefits affect anyone other than the buyer/seller, i.e. a third party.

Though when a business produces goods and services it may cause pollution, CO2 emissions, toxic waste. Businesses want to maximise their profit and thus dispose of their waste in the cheapest way possible. Thus there are external (third party) costs as well, and maybe even external benefits! External benefits/costs are together often referred to as externalities (or spillover effects).