At times of high unemployment, Keynes recommended that governments should reflate their economies by either increasing government spending or cutting taxes. Keynesianism was adopted by the US to solve unemployment following the great depression. It became the economic system of western countries after WW2 but due to inflation suffered a demise in the 80’s and 90’s.

This inflation was partly caused by the fact that Keynesianism never suggesting a deflation of the economy grew too fast as it in fact advocated a budget deficit and overspending. Keynesianism was responsible for the long-term boom of the 50’s and 60’s which created widespread affluence and decreased inequality where the classical market based economics has produce few rich and many poor.

It is often thought there is a left-right divide between market based and interventionist methods. Right wing economic liberals, such as Hayek, claim that interventionism is inefficient as the resultant subsidisation o and protection of industry reduced incentives for efficiency. Hayek argued for micro-economic demand side policies such as privatisation and the expansion of competition policy to increase efficiency.

Market-based supply side policies, aim to remove barriers that prevent free markets from working efficiently. Hayek’s market based method also contains some demand side policy. He wanted to control the money supply whilst reducing government spending and was thus completely against the Keynes idea of running a budget deficit. As Hayek explained, for market based methods to work, taxes must be limited to provide conditions that encourage producers to produce, rather than consumers to consume.

It is argued that market based policies lead to market failure. For example, when the free market controls training and education there is a skills shortage as employees are only trained in very narrow fields.

Many different incentives provide different benefits. For example, low tax rates provide incentive to highly paid people to work harder, low corporation tax provides incentive to invest and low benefits are an incentive to work. These are classed as interventionist incentives as the government directly act to change unemployment and productivity rates.

Low pay is a large disincentive to work. This is especially likely where benefits amount higher than the wages for available jobs. This is the Poverty trap, a problem of disposable income being lower than the benefit rates.

To get more unemployed people back into the labour market, the working families tax credit was introduced in 2009. A policy that ensures that people who work are always better off than those on benefits. It made an incentive to work post GFC and reduced unemployment once the economy began to recover.

Higher minimum wage rates can incentivize employers to conduct more training to ensure that their workers productivity rises with cost. Higher productivity means that output increases without directly increasing the supply of labour.

One example of interventionist incentivising is with tax credits. Tax credits made it easier to get away with very low wages, he cost of tax credits rose, increasing government spending. To fix this the chancellor introduced a large increase in the minimum wage in 2016 budget. By 2020 this could cut the cost of tax credits but also reduce the number of jobs available (Trade off).

Developing infrastructure needs money, therefore, they should compete with public services to get funded. However, infrastructure projects often get rejected by politicians because it is a type of austerity policy, cutting the state’s budget to make the public finance stable.

Private finance initiatives (PFI) often used to fund infrastructure and it comes from the private sector, however the cost for infrastructure project may be higher than the cost of borrowing, which can be end up with government failure.

In consequence, improving logistics could decrease transfer times and costs in turn increasing productivity and shifting the AS to the right.

Government intervention such as privatisation can open up to competition and increase competition in the market. Reducing trade barrier can also incentive the foreign competition. Competition policy is the structures governments have in place for the regulation of markets and monopolies, it Prevent growth of Monopoly power, reduce barriers to entry and keep markets contestable.

The Competition Act 1998 and the Enterprise Act 2002 are the current major source of competition laws in the United Kingdom. The act provides an updated framework for identifying and dealing with restrictive business practices and abuse of a dominant market position. CMA(competition and market authority) can help government fix the market failure and also can promote competition. Competition Act, an anti-competitive practice is defined as any practice that has, is intended to have, or is likely to have, the effect of restricting, distorting or preventing competition, like price fixing, exclusive dealing etc.

Labour Market is the availability of employment and labour.

__Reform __is a way to stop labour immobility. The government could help Geographic immobility which would mean to relocate the jobs or move the people closer to the jobs. This could be done by incentives such as subsidies and increase the availability of jobs. 1M people were in part-time or zero hour contracts who wanted to be in full-time but there being a lack in full-time employment. this needs to be fixed, as well as young workers are inefficient and need to be trained more than if they were educated.

Free market __is a method to __lower the National Minimum Wage which would allow the Free market element to allocate the wages as well as having the optimum number of people working contributing to the GDP. Removing trade union power would mean that firms can employ who ever they want to and the potential increase in labour mobility. this would improve labour market efficiency

Interventionist __helps job security as well as employability, the Government could __subsidies training costs, as well as improve on education (T Levels) since the people are more educated and are efficient, then they need to spend less on training costs actually helping the business’ productivity as the UK has one of the lowest levels.

Spending more on healthcare would help improve the labour force as there would be fewer absenteeism’s which would ultimately improve productivity and the Labour Market. The Government s__pending more on infrastructure__ would increase in FDI and businesses moving to the area increasing the number of jobs. As well as improving schools and roads. this sorts out a lot of problems of today.

Policies used by the government to promote the growth in the manufacturing industry.

The government may also impose regional policies to ‘even out’ production in a country. For example, the UK incentivising Nissan in Sunderland, this went some way to reducing unemployment in the North-East of England. Also, the UK governments push on apprenticeships to get people in to secondary employment is another example of industrial policy.

After the GFC in the UK the government imposed further controls on the financial sector to avoid any damage being done in future. An effective industrial policy promotes manufacturing in a country but not too much as most economies would wish to be tertiary. 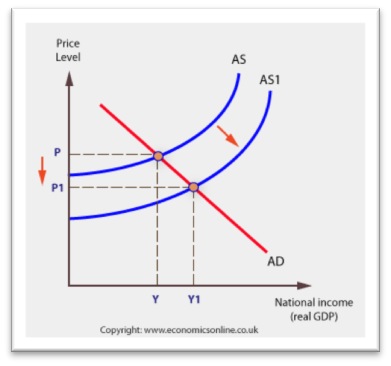 AS curves shift to the right and this will indicate the productive capacity increases and will enable the economy to grow without there being massive amounts of inflation due to the large increase in supply to the market. This will lead to jobs being created as well as the economy growing. Supply-side policies are long term and there will be a time delay in them taking action with the benefits taking full effect. 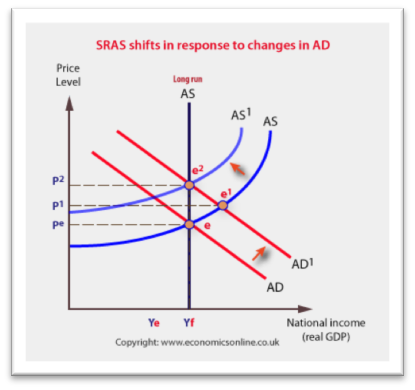 The shift to left of the AS curve will indicate that the productive capacity of the economy has decrease leading to an increase in the spare capacity as it has moved away from full capacity. If AD shifts to the right it will mean demand in that economy has grown but there is not as much supply in the market, if AS was to move to the left and AD move to the right as in this case, it would increase the prices from P1 to P2 this would increase inflation and lead to increased prices because not as much is being produced at this level of demand. This could be due a government fail where resources have been misallocated leading to the reduction in AS.

A current example of a supply side policy will be the new T-levels that were introduced by the government in the Spring 2018 budget. T levels are an example of the a supply side policy because it is improving the supply of skilled labour to the market. Currently there are millions of qualifications for technical skills but the T level will standardise this so that the workforce will know who they should employ.

Like many supply side policies there will be a large time lag in whether we know if the T level is successful or not. Indeed it will take many years for them to have any affect on our economy. The T level may be government failure or it may be government success only time will tell.

Evaluate the strength and weakness of supply-side policies

Some supply side policies can make markets work better but also have a downside. For example, when labour markets are made more flexible, employees are more likely to be made redundant. Employers being able to hire people without worrying that they may have to employ them forever. UK’s flexible labour market keeps unemployment below that of France and some other developed economies.

Policy conflict occurs when there are austerity policies as increased spending on education and training is clearly needed to reduce skills shortages and facilitate innovation. After the 2016 EU referendum the exchange rate fell sharply (WPIDEC) and UK exports became more competitive. Supply side policies can be used to help competitiveness in the long run to avoid recession. It is good to take advantage of export opportunities by increasing aggregate supply. There can be trade between preference for free market policies or reducing imbalance in incomes and wealth across the UK.