Capital Spending – occurs when a business invests in premises or equipment, a long-term investment in the business. Things like new machinery or staff training. FC!

Investment – spending now which generates income in the future. E.g. buying capital equipment or spending on R&D. Similar to ‘additional capital’ from our SoF lessons from 1.4. Again, a fixed cost!

Depreciation – Loss in value of capital equipment over time, often due to wear/tear or dated technology. Depreciation is given an approximate valuation each year and listed under fixed costs in accounting.

Percentages and percentage changes are useful in studying the performance of any business. Percentage changes in sales volume, sales revenue and costs are often the quickest way to see how a business is doing. For example, Apple announced record figures for Q4 of 2014 – TR of $74.6bn, up from $57.6bn for Q4 of 2013. 74.5 million iPhone 6’s were sold (though Samsung had sold 78mill S5!). Net Profits were up to $18bn from $13.1bn for the same quarter a year earlier.

All businesses need to keep some financial records, not just for the taxman, but for their own planning and monitoring needs! Businesses need to know if they are profitable!! If profit is declining – then warning signs should sound as it is a big reason to take some action! The profit signalling mechanism can act as an incentive to enter/exit a market. If a market is profitable, then this will be a beacon to attract other producers to the market. The ease of entry/exit depends on the barriers of entry for the individual market in question.

When a business receives income from the sale of its products (turnover/sales/revenue), it has various items it must pay for (the costs) before it can work out how much profit is being made.

Profit can be measured in different ways – in our syllabus we concentrate on Gross Profit and Operating Profit (Net Profit considers tax/interest). OP allows for all total costs (both TFC and TVC), whereas GP only allows for TVC.

Although this is a useful judgement figure, it does not take into account fixed costs (overheads). Thus we need to consider operating profit (OP) too.

Operating profit is a key indicator of business performance and a figure that shareholders will watch closely!

Net profit is operating profit minus tax/interest for the year.

Net Profit/Profit for the year goes to the owners of the business. They may reinvest it, or share it amongst owners/shareholders.

Profit margin tells the business just what percentage of its turnover is actually profit. It is the ratio of profit to turnover expressed as a percentage.

A profit margin is an example of a financial ratio (a figure calculated from other figures to give useful information to business managers). Regardless of whether you are calculating a gross or operating profit margin, the formula is the same.

A more risky business industry, like oil, will need a higher profit margin to survive. It has to fund expensive exploration, which may not even find oil. And something may indeed go wrong, as it did for BP in the Gulf of Mexico or the influence of the Libya conflict.

Many business start-ups make a loss at the beginning, and have a rather small profit margin for the first year or two. It is important for them to have sufficient finance to survive the difficult early stages, until margins improve.

As with any financial ratio – a profit margin is only useful if compared with another figure. Either figures for the business from previous years, or figures from competitors.

For example – the operating profit margin figure for Marks and Spencer of 8.9% does not tell us much. But if we know that for the previous year it was 9.6%, it straightaway tells us that things are not going quite so well!

Managers will use financial information to assess how well the business is doing. An increase over previous figures indicates that they are on the right track; a decrease is a cause for concern and a signal for something to be done. If your increase is not as big as your competitors, you should also be concerned by this!

Business costs are help managers make decisions and are needed to calculate profit and loss.

Costs can be either fixed or variable with output. Total costs are therefore the sum of fixed + variable costs.

FIXED COSTS – are costs that do not vary with the number of items sold. They HAVE to be paid whether the business is making sales or not. They are also known as OVERHEAD COSTS.

VARIABLE COSTS ___are costs which ___vary with the number of items sold or produced. They are often called DIRECT COSTS as they can be directly related to a product.

We can visually display how total cost is in line with total variable cost by the difference of fixed cost: 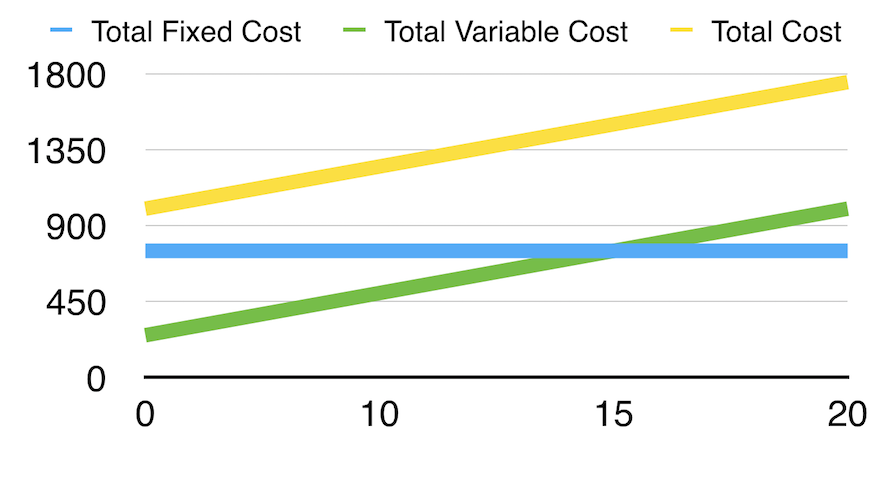