At times there maybe a conflict of interest. For example, a government desire to plug the deficit by reducing government spending. But at the same time, they also desire to reduce unemployment.

Labour = spend money to make money. Conservative = plug the deficit for a more stable future economy. Irrespective of your political allegiance: which option do you think is better?

Most government has four principal objectives:

The 4 Government Economic Policies are: F, M, S-S, and ER!

Expansionary policies – to grow the UK economy! This can include such action as lower interest rates, tax cuts and __increase in __public expenditure.

Contractionary (deflationary) policy – to slow down the UK economic growth rate. This can be put in place if the UK economy is growing too fast leading to high inflation, or if it is growing unsustainably. This can include such action as raise interest rates, tax increases __and expenditure __cuts.

__Policy conflicts - __The government whilst seeking to manage economic affairs may have to accept trade-offs.

A trade-off occurs when two objectives cannot be achieved – the more you have of one, the greater the opportunity costs in terms of the other. Informally, a long-term OC.

E.g. high U/E is a price to pay in order to keep inflation in check. But if we use expansionary policies to reduce U/E then inflation will rise, thus people will turn to imports and this is bad news for B of P! Either way a trade-off occurs.

Policies have to be tailored to achieve a reasonable balance between all objectives – the government truly has a difficult juggling job! Recently, with the global recession hitting the UK hard, the gov have placed greatest emphasis on principal objective number 1: stimulating economic growth.

Governments raise money through taxes on individuals and businesses. What are the main types?

What if there were higher interest rates on loans?

Governments want to have an efficient and competitive economy. Naturally they want businesses to expand, produce more and employ more workers (this is good for the country as a whole!). Supply side policies are policies that the government has to try to improve the efficient supply of goods and services, raise aggregate supply and productivity.

Policy designed to manipulate a country’s currency into either a WPIDEC or SPICED scenario to suit a country’s import/export trend.

The recession that developed in 2008 was triggered by the ‘credit crunch’ via a global banking crisis. In the UK the gov took a major stake in several banks and significantly increased government expenditure. Struggling firms in key industries (e.g. car manufacturing) were given financial assistance to prevent their failing.

It all goes back to the complimentary or vicious cycle of an economy. Consumer expenditure = demand for goods/services = profit. This finances the factors of production (CELL) that are used to run a business. One of the factors is labour = income for households = expenditure on consumer goods….and the cycle goes round again! 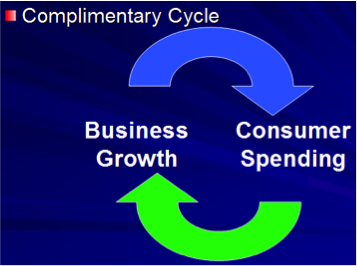 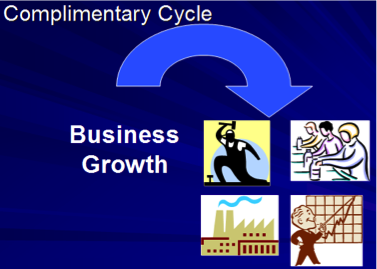 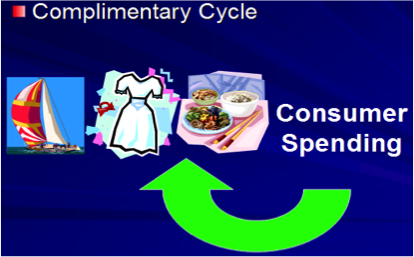 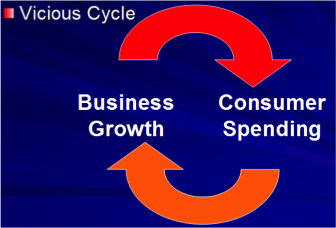 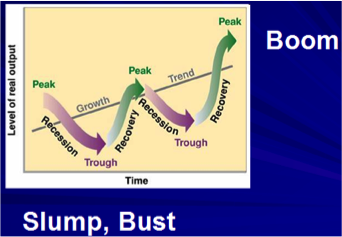 The onset of the 2008 recession/banking crisis frightened consumers – so they quickly cut back on spending in order to save more (a leakage in the cycle!) as people were worried they would lose their jobs!

Economic growth is an increase in the real level of national output. It is measured by percentage change in GDP. It can bring significant benefits such as higher standards of living and increased employment opportunities.

In a healthy free market economy, many features of economic growth will develop on their own as producers respond to the profit-signalling mechanism (profit motivated).

Less often, a simple increase in the quantity of inputs can make a difference. While aggregate demand was growing in the UK, immigration stimulated production by providing an easily available source of labour – including many people with skills that were scarce in the UK. Although it is not as easy to increase the quantity of land.

What can the government do?

In favourable circumstances, economic growth can happen on its own. But market failure (failure to allocate resources efficiently) can be a big impediment to growth and governments can act to reduce distortion. They can also help the growth process along in other ways.

In addition the gov can create incentives. They may:

All of these policies are very long term in their impact; many would be classed as S-S.

Can the economy be turned around in a recession?

Ideally the government would like the economy to grow in a sustainable way. Gordon Brown was pretty good at this! But economic growth might be too fast. Or it might be negative - a recession, where aggregate demand falls, profits are depressed and businesses reduce output and make workers redundant.

Falling output – negative growth – herald the call for expansionary policies but these may have a multiplier effect. Government spending on capital projects (new schools/hospitals/roads) may lead to increased sales of building materials/construction equipment/employment. Workers receive income which they spend, and the cycle turns complimentary again.

Economies are cyclical and you could say that recessions are inevitable – the cycle of boom/bust is simply how economies work. It is impossible to say what would have happened if the banking system had avoided collapse in 2008, but a recession was due anyway!

The economy is clearly vulnerable to shocks and it is hard to predict events accurately. The Irish economy is a good example (Google a graph of its growth in the 90s/00s! A staggering 350% increase), was overheating from such a massive boom long before the fall in housing prices in the US undermined the banks on a global level.

During a boom, aggregate demand is growing strongly and businesses respond by investing. Inflation may occur. Employers will be searching for people with scarce skills and wages might be pushed up.

The threat of inflation will trigger moves to reduce aggregate demand. Initially the objective will be to make demand grow less fast – to prevent the economy from overheating. This has been the ‘sustainable approach’ of Mr Brown and the MPC during the ‘naught-ies’ prior to 2008.

A recession will affect firms in different ways. Demand may fall and cash flow will suffer. Businesses may try to cut costs (thus redundancies and outsourcing). Firms will be increasing dependent on external sources of finance and adversely affected by MPC interest rate changes.

Profits may fall, reducing retained profits and investment. Firms maybe reluctant to invest when demand is falling anyway. Suppliers will be affected too. Firms in construction and engineering sectors are especially vulnerable.

All of these trends are, collectively, going to reduce aggregate demand further!

A key aim of gov policies is to keep the economy stable. Cyclical fluctuations increase uncertainty and make it harder for businesses to plan for the future. They prevent governments from reaching their 4 macro-economic objectives.

Contractionary policies will be used to tackle a boom if an economy is overheating. This will, of course, slow down economic growth – but if implemented at the correct time will make that growth sustainable in the long-run.

Expansionary policies will be used to stimulate an economy that is stagnating. Subsequently aggregate demand will be moderately increased. For an economy which is actually in recession (defined officially as two consecutive quarters of falling output) the expansionary measures should be more robust.