Macroeconomic policies affect the economy in different ways and the outcome depends greatly on the state of the economy at the time of implementation. Most macroeconomic problems require a policy package that includes a range of different measures. You should be able to identify the economic and political objectives that trigger policy change and to evaluate the likely effectiveness of specific policies in relation to the relevant objective.

Most economic strategies require a combination of policies. This will depend on the time lags (i.e. time each policy takes to produce results) and on the political issues of that moment in time. As the case study testified, the economy was fairly stable in 1997. The then Chancellor, Gordon Brown, took advantage of this to introduce a new way of determining monetary policy by making The Bank of England independent and responsible for the inflation target (MPC). The aim was that this would make accelerating inflation less likely in the future. It also removed politics from monetary policy, eliminating the ability of a Chancellor to drop interest rates just before a general election…

Think about what their solution for the resulting GFC recession was. What policies did they have? Do you pay attention to current affairs? It is essential for success in this subject! 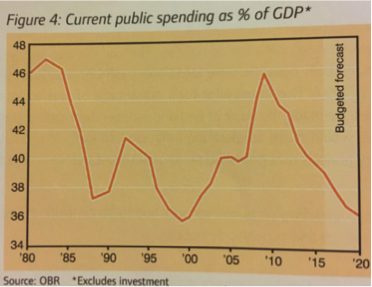 Osborne was obsessed with balancing the books – he wanted to cut the budget deficit(?) in order to start to tackle the national debt(?), or “fix the roof whilst the sun shines” as he famously put it. In the aftermath of the GFC public spending rose above 45% of GDP in order to nationalise the struggling banks.

By the time Osborne departed from government in 2016 it had fallen to 39% so arguably he was on course to have a budget surplus by 2020. The government’s role in the economy was substantially smaller. Post Brexit, May has changed focus and might need to provide government spending as an injection to our economy. So is that the end of austerity? For now perhaps.

Was there an alternative?

Many an economist would argue that austerity caused a much longer recession than necessary. Up to 2013, the economy remained sluggish and fell back into negative growth territory for one quarter (thus it was not a recession or ‘double dip’ as was feared at the time – but it came close!). Then, suddenly, in 2014 we registered annual growth of 3.2% for the year – the fastest growing economy in the EU! Was the ‘sluggish austerity’ years really necessary?

An alternative policy would have involved avoiding government spending cuts and shrinking public services, a Kenysian spending stimulus to the economy. There would have been an earlier return to growth, with higher tax revenues funding the spending and still the need to cut welfare payments to find the cash. This would in turn helped to reduce the public sector deficit.

If money had been channelled towards building infrastructure (perhaps via PFI/PPP initiatives), economic growth would have been even stronger and unemployment would have fallen faster.

Reflection time: What would you have done if you were Chancellor of the Exchequer in 2010? Would your policy package differ to Mr Osborne’s? If so, why?

So far the focus has been upon conventional fiscal, monetary and supply-side policies and their effect on economic growth. There are other policies and perspectives to appreciate as well.

Automatic stabilisers can work to reduce the impact of the economic cycle without any change in policy. As U/E rises, government expenditure rises to cover the cost of benefits. Tax payments fall because incomes are falling. If we envision the C.F.I, this provides an instant increase in injections and decrease in leakages that will stimulate the economy or at least reduce the impact of recession. The reverse happens (gov spending reduced and taxes rise) as the economy recovers and these ‘automatic stabilisers’ should dampen the effect of a developing boom.

The policy package chosen by the government will depend partly on political preferences, but it will also be affected by many other influences (see below).

Criteria for success and evaluating effectiveness

Evaluation has a tendency to reflect political preferences. Any good economist will look closely at the evidence and work out the implications without drawing on their personal political position! This combination of political/economic issues may derail a policy that when formulated, looked sensible.

A summary of the different approaches

Keynesian policy - intervention: Keynes believed in the ‘animal forces’ that required government intervention (expansionary policy stoked by government spending) to boost economic growth. His belief has been adapted by the western world since WW2 – thus the mountains of national debt!

Monetarist policies - the Free Market: Hayek believed in the free market and the ‘invisible hand’ of demand/supply – that organic growth via sustainable banking and stable monetary policy would be a more sustainable growth model

Austerity policies: Used in times when national debt becomes a worry, cutbacks to manage the books and reset the sustainability of national debt.

Throughout UK political history, contrasting theories have influenced policy making. Keynes dominated policy making from the 1940s to 1970s. With the election of Thatcher in 1979, there was a movement towards ‘the monetarist approach’ based on the work of Milton Friedman and other free market economists. Since the 1990s, policies have been drawn from both approaches. Current policies are clouded with uncertainty as we await the ‘Article 50 withdrawal’ from the EU.

In the recent mid-term elections in America, the Democratic Party took a battering. But not in Minnesota. In 2010 Democrat Mark Dayton won the Governorship by a whisker from the Republicans who had been running the State government for the previous eight years. In 2014 Dayton’s majority was so clearcut that his Republican challenger conceded defeat before midnight. On a night of disaster for his party, Democrat Dayton won by a landslide in Minnesota.

Minnesota and Wisconsin sit next to each other on the southern shores of the Great Lakes, i.e. on the border with Canada. Dayton won the governorship in 2010 with a policy of increased minimum wage, higher taxes on high income earners, and higher public spending in the poorer districts of the State. And that’s what he did. After a battle with Republicans he brought in the higher taxes in early 2013. The minimum wage rises began in August 2014 at $8 an hour, and will rise to $9 in 2015 and $9.50 in 2016. The public spending increases over the 4 years reached $2.1 billion.

The reporter stated that ‘minimum wage hikes actually punish low-wage employees’. Interestingly the magazine made no mention of the alternative approach being taken in the next door State. In 2011, seeing the contrasts between the economic policies run in the neighbouring states, Scott Walker declared that Wisconsin’s economy ‘would take off like a rocket’, as businesses relocated from Minnesota. He’s still waiting.

Although the picture up to this point shows a clear victory for Dayton and Minnesota over Walker and Wisconsin, it may be too early to draw firm conclusions. The Financial Times quotes a Minnesota Chamber of Commerce representative saying that ‘companies in her state are looking to flee Minnesota’s higher taxes and increased regulations to move to Wisconsin… we hear about it almost daily’.

On the other hand Minnesota’s higher spending includes a new scheme of working tax credits. These are now helping 325,000 working families in the State, but it’s a bit early yet to find evidence that poverty is being reduced. By the next mid-term elections, in 2018, the full story will be clear.

Sources: The Financial Times October 30th_ 2014; US Labour Bureau and other government and State data._

Key concepts are at the end of this lesson. 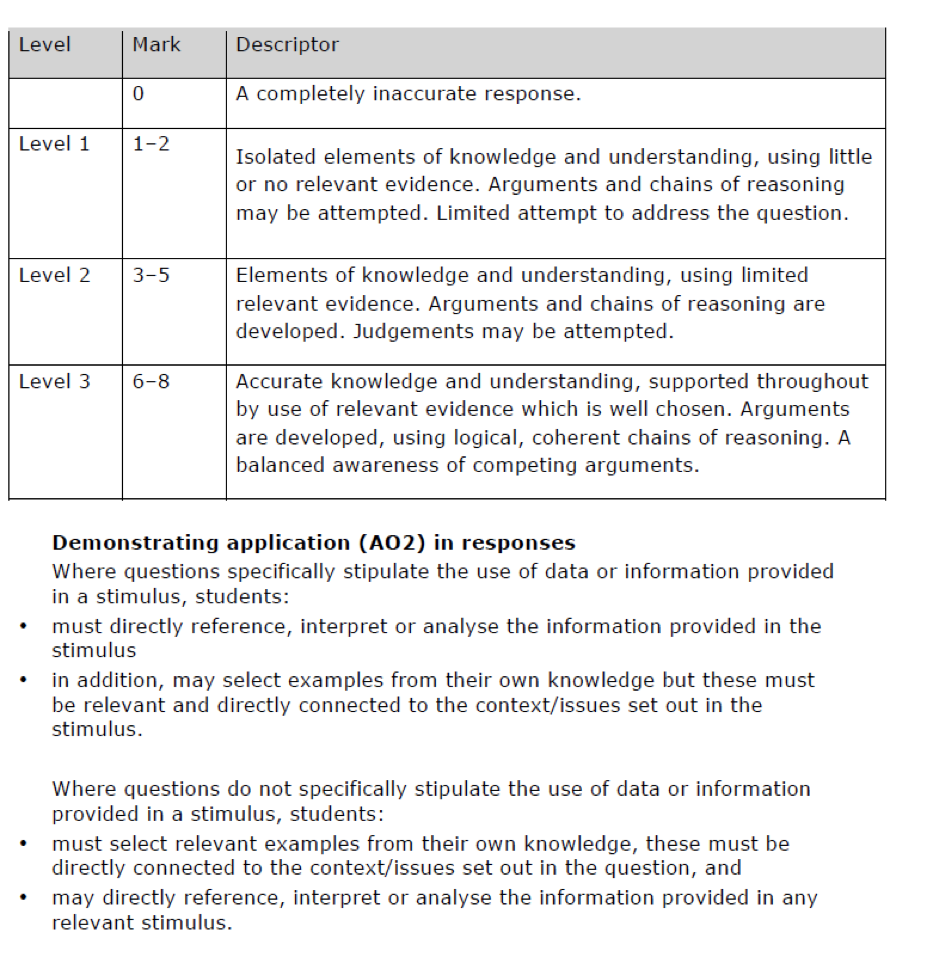 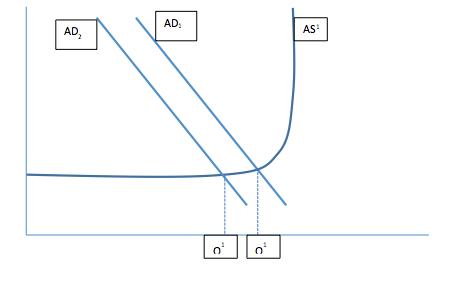 On the face of it an increase in taxes on any sector of society will push aggregate demand to the left; of course if the revenue generated is used to pay higher working tax credits, that would provide a compensating swing back to the right.

Here is a question that seeks out a value judgement; but can the students find evidence to support their arguments? Here are some possible ones: