Expansion is sensible as turnover/profits should increase and the business should evolve into a market dominating position. Costs per unit can be reduced as output increases as well. Large firms can gain a competitive advantage over smaller rivals. A good example of this is Tesco versus Londis. 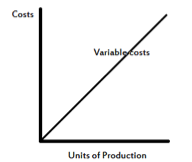 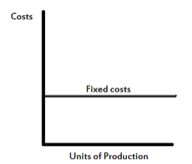 As a business increases its output, total costs are likely to rise. More output means more resources are needed, normally including raw materials and outputs. Changes in average costs (the cost per unit produced) are less straightforward. Arguably fixed costs (if you stay with the same factory and don’t need an extra one) will be more or less the same as output increases. For example, rent is rent whether you produce 100 trainers or 1,000. Sharing such costs between more units of output should bring the average costs down – we call this economies of scale!

There are ways in which the growth in the size of an overall industry will allow firms in that industry to benefit from average cost reductions. Such cost reductions are called external economies of scale. E.g. specialist suppliers and support industries are likely to develop.

- Local education and training providers build up a pool of skilled labour with the right specialism. E.g. when Pfizer factory was in Kent quite a lot of ‘scientific courses’ were on offer at the local technical colleges.

External economies of scale benefit all of the firms in an industry by reducing their costs. They do not give an individual firm an advantage over local competitors as they will share the same benefit. Quite simply they are the advantages to a firm of operating in that industry, due to its size, and they benefit EVERYONE in that industry. 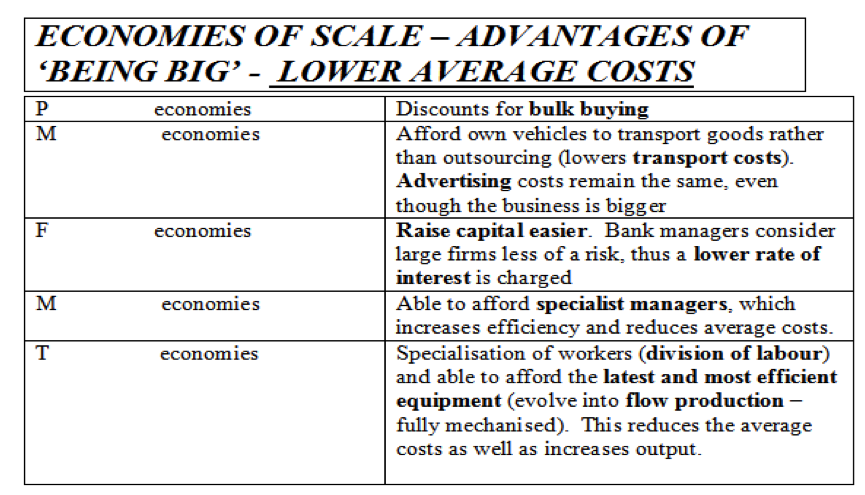 Risk-bearing economies = big businesses with many products/markets are diversified and can spread risk. E.g. Coke is doing well in America, but poor in Asia. Or Diet Coke is selling strongly whilst Fanta is going through a period of poor sales.

What is market power? How expensive is a bottle of water at the airport? It is a closed market – not many competitors. How much is the same bottle of water nearby the airport where there is more competition? __Market power enables exploitation and profit maximisation. __

Where there is stiff competition in markets, each firm has to operate as efficiently as possible and accept the going market price. This works in the favour of consumers but isn’t the optimal scenario from a business’s point of view. Where businesses are large enough to have some control over the market, they can gain at the expense of others (consumers and suppliers). In the extreme, a pure monopoly has just one supplier with no competition – it can profit from raising prices and is under little pressure to operate efficiently.

Where a business has power over suppliers because of its market share, there is monopsony power. Small suppliers who depend on big buyers are in a very weak bargaining position. Tesco and it’s suppliers are a very good example! Leading supermarkets use monopsony power to reduce prices and impose unreasonable conditions, such as delaying payments.

In extreme cases businesses can have a combination of both monopoly and monopsony power, giving them substantial power to control prices (Tesco have attained this). The possibility of developing market power creates an incentive for firm to grow but reduces economic efficiency.

Which toilet roll manufacturer has the most market share? Branding boosts market share. Many industries have big name businesses with strong and established brands. Think about it. Who is number one in the coffee industry? People see Starbucks, Costa and Café Nero as predictable/safe brands – you know what you’ll get compared to an unbranded independent coffee shop. The same for own brand toilet roll (although they did do well during the last recession. Why? Clue: inferior good).

Brand recognition is an important way of production differentiation from competitors. Having a strong recognised brand is a valuable asset. Consumers will pay premium prices for the best-known brands. Business growth helps to increase brand recognition, another advantage of business growth.

__Brand recognition = __Measures the % of consumers who recognise a particular brand and associate it with product features. A high brand recognition percentage makes branding a valuable marketing tool.

Do economies of scale go on forever? Over time businesses will suffer from being too big!

MES is the optimum level of output for production – at which costs are being minimised. At MES businesses can achieve competitive advantage.

Economies of scale will push average costs down as output increases, until diseconomies weigh in and push costs back up! The lowest part of the average total costs (ATC) curve shows the lowest possible average cost. This indicates the best or optimum point in terms of productive efficiency.

The level of output at which the lowest average cost is reached is known as the minimum efficient scale. Reaching the MES is a valuable source of competitive advantage. If rivals are tied to output levels at which their average costs are higher, a firm at MES will clearly have an edge on them! They can undercut them in prices and operate at a larger profit margin and expand further!

With the current state of technology, it appears that available economies of scale make a global oligopoly possible for many consumer products. What is an oligopoly? Where a handful of businesses dominate the market with collectively >60% market share.

Large firms enjoy economies of scale and thus lower their average costs, whilst smaller firms may have to find other ways to compete. In the motor vehicle industry, for mass produced cars, the MES (which stands for?) has been rising for some years. The only car makers who can survive on a small scale are those catering for niche markets (classic cars etc.)

The importance of size and volume cannot be underestimated. A major supermarket might make a penny or two of each milk carton sold, but millions of people buy milk and if you do the maths that equates to hundreds of thousands of pounds in profit! Growing bigger and selling more benefits businesses (such as Costa Coffee above!). Growth and increasing sales volumes raise profits.

Economies of scale, market power, string brands and increasing volume of business can be linked to growth of a business – generating profit and success. Despite this, most businesses are small as bigger is not always better.

Beyond a certain point, increasing size will bring disadvantages rather than advantages and push average costs up. These are called diseconomies of scale. 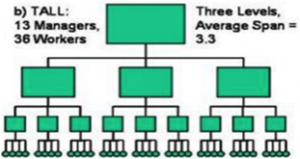 Occur when an industry expands too quickly. Individual firms are then forced to compete with each other and bid up the prices of factor inputs like wages and raw materials. E.g. the app development industry recently with the flotation of the likes of ‘King’ company, etc., making programming a well paid job!

One final problem due to size – skills shortages

Growth involves employing more people and this can be difficult if supplies of suitably skilled labour are limited. The app industry example above is a good example of this (there’s a particular shortage in female programmers!). In 2015 the construction industry had skill shortages. Estimates says that 1 in 3 of the largest construction companies is having to turn down bidding opportunities due to a shortage of skilled labour; thus the governments push on apprenticeships.

The quality of a firm’s employees is critical to success. If growth entails taking on new people who are less experienced, capable, or committed this has a negative impact on the standard of work produced and therefore the performance/reputation of the business. There can also be an impact on the way the business operates – its corporate culture.

Corporate culture describes the ‘ways of doing things’. The shared values, attitudes and beliefs that characterise members of an organisation and define it’s nature. The atmosphere and normal pattern of relationships between people. Sometimes a culture can evolve over time with little conscious shaping. E.g. Google’s corporate culture could be described as relaxed, informal and creative.