__Tackling inflation and unemployment: __ It’s difficult to achieve both a low inflation rate and low unemployment level. To explain this trade off fully you need to connect the dots between the following:

The government might try to control inflation with contractionary fiscal/monetary policy (raise taxes and raise interest rates to reduce demand pull inflation) to reduce AD/output. This means less labour is required by businesses due to a fall in demand, thus unemployment will rise! Then to reduce unemployment the gov may use expansionary fiscal/monetary policy (reduce taxes and reduce interest rates) which increases AD, meaning more labour recruited, reduces unemployment. But causes unsustainable growth and inflation! This is a classic trade off of government policy and a classic example of how hard it is for the government to get all ‘juggling balls’ of macroeconomic objectives behaving correctly at the same time.

__Tackling the budget deficit and economic growth: __Current government pledge to neutralise the budget deficit (the government currently overspend) by 2020 will mean further spending cuts (a contractionary policy). This will mean tighter corporation tax controls on MNCs which might scare off FDI. These austerity policies will effect economic growth and have arguably led to stagnated growth since the GFC.

‘The living wage’ of £7.20 for over 25s and unemployment: The ‘living wage’ was implemented in April 2016 for over 25s @ £7.20 - this is an extra 50p an hour and on average £50 a week per worker, which will raise business costs. Therefore business will try to do more with less labour as a result of labour costs going up. This will mean less recruitment and possible redundancies, plus more ‘zero hour contracts’ and part-time staff. Thus in the long-term raising unemployment and underemployment, the trade off of any increase in the national minimum wage (now known as the living wage).

The Issues / Difficulties in Managing the Macro-Economy

The issues governments face in managing the macro-economy are complex and often contradictory, sometimes macroeconomic objectives are incompatible (e.g. cutting the deficit and economic growth!).

No macro-economic objective has guarantees plans change, political pressures emerge and shocks/unintended consequences occur. All policies involve time lags, they take time to implement and people/businesses take time to adjust. In our age of globalisation and inter-dependency, events elsewhere can easily upset government plans (e.g. question mark over China’s economy are effecting our own).

Global shocks can cause significant changes, as when oil or commodity prices change quickly, thus changing political priorities dramatically. E.g. 2014-2015 oil price crash due to excess supply greatly reduced export revenue for Russia and Brazil, and their exchange rates tumbled. Another good example is natural disasters. The Japanese earthquake, tsunami and Fukushima nuclear meltdown had a big effect on the Japanese economy due to mass uncertainty. It also influenced the German decision to end their use of nuclear energy.

As we should know by now, supply-side policies work particularly slowly. Many of them are long-term projects and some are risky. E.g. banks were de-regulated in the 80s but it took to 2009 for governments to realise that this contributed to the breakdown of the financial system. On a fiscal note, changes in taxation have an almost immediate impact whereas changes to spending take time to work through. Fiscal and monetary policies generally need a year to take effect, some supply-side policies take a generation. Time lags will occur. Thus politicians prefer policies that will come to fruition before a parliament is over and another election arrives. Why? So they can get re-elected!

A good example is housing/land. Modern manufacturing requires large areas of land to be developed for plants/machinery. Planning restrictions protect farmland and recreation areas (greenfield sites), thus raising the price of land with planning permission that makes housing barely affordable for many households. Another incompatible objective, but which is more important: affordable housing or avoiding building on greenfield sites?

Governments have a tricky job and must act in the public’s interest, thus unintended consequences are likely when there are trade offs.

Arguments for Raising and Reducing Taxes

Likewise there are those who want to see greater involvement in Europe and really buy into the benefits of the EU, and those who are convinced by the drawbacks of the EU and want us to break free via the referendum. Where do you stand, should we stay or should we go? Should BREXIT be fulfilled fully?

Economic, as well as political, policies can have unintended consequences. For example: the much talked about ‘fat tax’ or ‘sugar tax’ to reduce obesity could increase inequality (lowest income groups are most likely to consume junk thus such a tax would be a regressive tax as the poor spend a higher proportion of their income on such foods).

Links between the various ‘policy packages’ need to be considered in the short and long run (USE IN YOUR A04 BIG MARK CONCLUSIONS!), and you as an economist should always speculate as to the possible unintended consequences of policy instruments. Consider this aspect in your conclusions. Mention the Trade Off when talking about fiscal/monetary/supply-side initiatives.

Benefits and Drawbacks of the EU

As often is the case in economics, there always anomalies that break the rules! China has achieved exceptional economic growth despite a lot of ‘state owned enterprises’ and a great deal of government direction/intervention.

Free market (Hayek) economists emphasise supply-side measures and their importance in increasing aggregate supply. They distrust fiscal policy as too interventionist and only producing short-term gains. This seems to reflect the current Chancellor – who has a strong desire to reduce taxes and spending (fiscal), but raise the minimum wage (supply-side).

Interventionist (Keynes) economists question the effectiveness of some supply-side policies and draw attention to market failures. Many dislike cutting higher rate of taxes due to redistribution and inequality issues it creates. They tend to be less concerned about high public sector deficits, arguing that if the economy grows faster as a result of intervention there will be more GDP and more tax revenue to make future repayments easy.

They see deficits as justified in the short run to keep up aggregate demand, this seems to be the economic policy of the opposition at the moment. Which do we think is the correct option?

Identify the three most important issues facing the government today. For each issue suggest a package of policies that might be helpful. Then reflect upon your ‘policy package’, is there any conflict?

Each political party has different opinions in regards to the best way to manage our economy. It also depends on where you fall in regards to the extent to which the government should be involved in our economy . Should they be at the heart, the driving force, correcting market failure (Keynesian beliefs, which each western gov has bought into) or should they have a minimal involvement as they create government failure, leaving it up to the free market forces of demand and supply to work in a more efficient manner (more of a Hayek approach such as in Hong Kong or Singapore – the freest economies in the world!)?

Similarly there are those who want to see greater taxation and spending (much like the Scandinavian countries), and those who believe taxes should be cut and the public sector reduced (traditional conservatives). Where do you stand, should we raise taxes in this country to have better public services?

On November 12th_ 2014 the Financial Times published the results of a poll of 172 members of the CBI – the big business lobby group. CBI members want the fiscal deficit reduction complete by 2018-19. To achieve this objective, 39% want the reduction achieved entirely by spending cuts, while 37% support the government’s aim of an 88/12 ratio of cuts to tax increases._

Despite their enthusiasm for cuts (84% want further cuts to welfare spending), 90% want the capital spending budget increased by more than the planned 2% by 2018/19. When asked which area of public spending they most valued to expand their businesses, infrastructure came top followed by schools and universities. They want a ring fence to protect the £53 billion schools budget but an end to the protection of NHS spending and spending on international aid.

Katja Hall, the CBI’s deputy director-general said money spent on infrastructure was one of the best ways to boost growth. The CBI calculates that every £1 spent on construction generates £2.50 of economic activity. Therefore capital spending should increase as a proportion of gross domestic product. She also said that ‘We have to move away from the sense that the deficit is somehow no longer an issue just because growth is starting to pick up’. 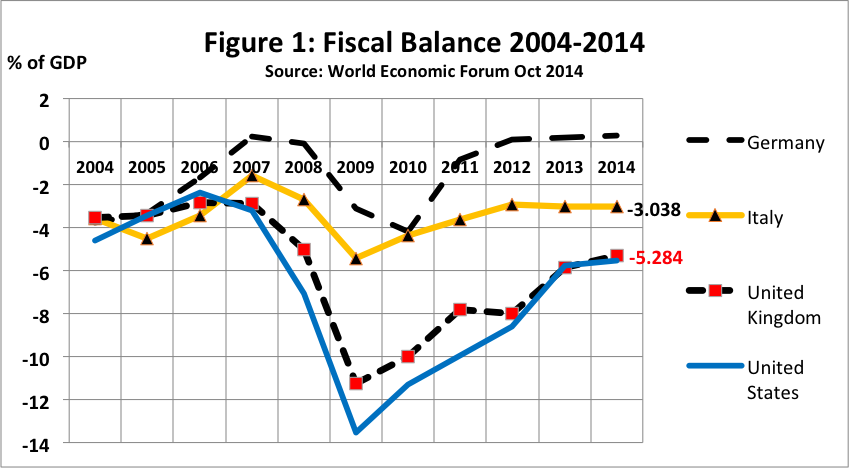 Away from the CBI, economists have started to show concern about the UK’s current position. Despite the IMF’s estimates of the UK’s fiscal balance in 2014 (shown above), recent months have seen a deterioration rather than an improvement in the budget deficit. So the 2014 outcome will probably be slightly worse than -5.284% of GDP.

Another rising concern relates to Britain’s balance of payments position. Although there’s a widespread view that the British economy is doing well while Italy is in crisis, the balance of payments figures give a more nuanced story. Yes, perhaps the Italian balance of payments surplus reflects weak demand for imports, but that may be better than Britain’s position as having the proportionately biggest deficit among the major developed economies. The graph below sets out the position among selected countries. The UK’s trend position is perhaps the most worrying feature. 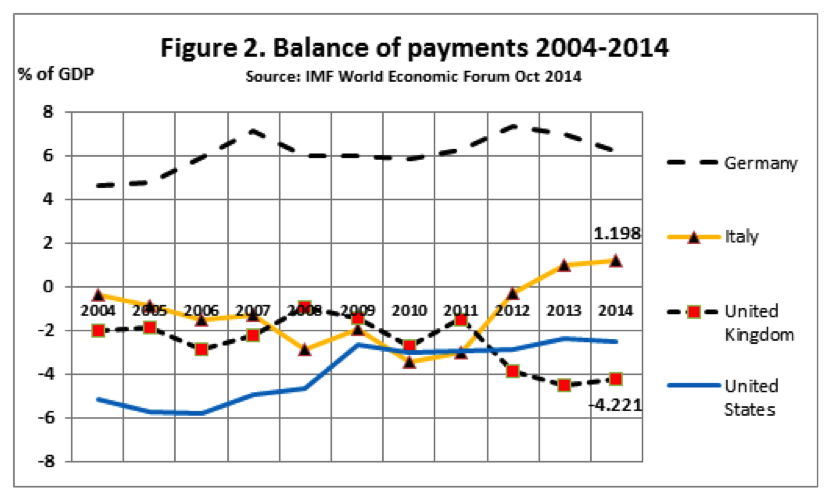 __Question: __Discuss whether economists are right to find the UK balance of payments trend ‘worrying’. (8) 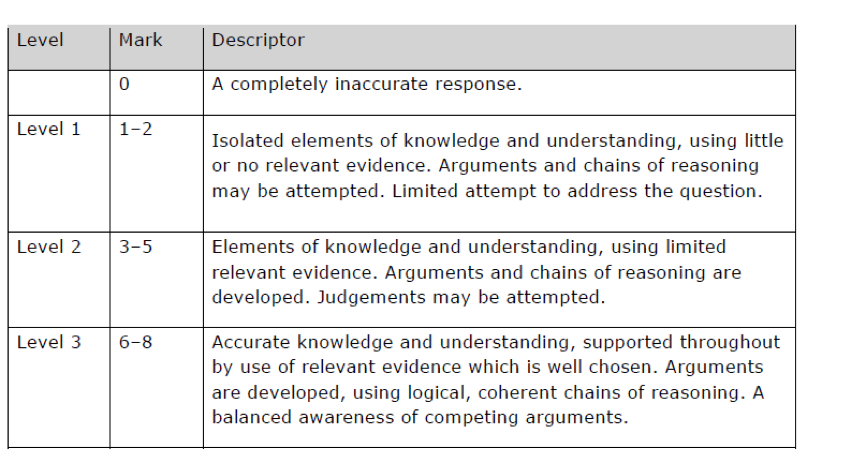 Question: What is meant by supply-side policy?
Your answer should include: Policies / Markets / Business / Work / Efficiently
Explain how spending on infrastructure might help the supply side of the economy.
Your answer should include: Higher / Spending / Infrastructure / Faster / Delivery / Times / More / Reliable / Overseas / Investment / New / Factories
Explanation: Higher spending on infrastructure could help stimulate economic growth in the short and long run. In the short term is the impact of the construction process itself (and its claimed 2.5 multiplier effect), i.e. AD is boosted by this investment spending. In the long term smoother infrastructure means lower cost, more reliable supply, which can help the international competitiveness of our firms
[textbox_withcheckanswer question="Explain how spending on schools and universities might help the supply side of the economy.
Your answer should include: High / Quality / Creative / Qualified / Labour / Investment / Future
Explanation: The UK economy faces skills shortages as businesses need skilled workers and shortages of skills pushes up business costs as employers have to compete to attract people with the required skills.