Please note what the Getting Started Guide has to say about the Theory of the Firm/Market Structures diagrams! 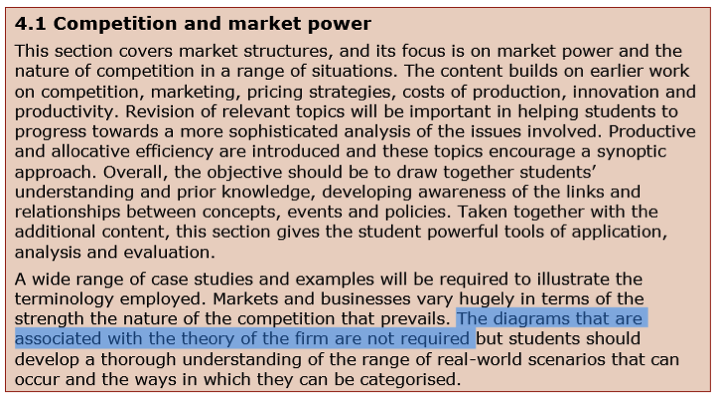 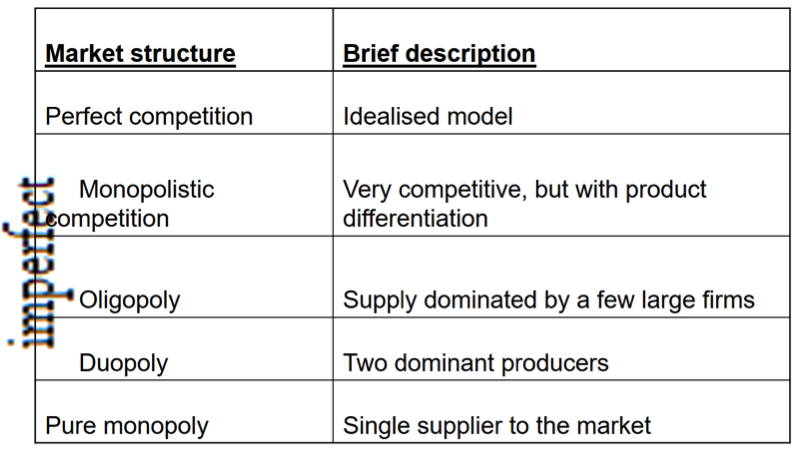 Perfect competition and a pure monopoly are at either end of a spectrum of market structures. There are relatively few if any industries which conform to the strict characteristics of these two models. Most industries fall somewhere in between because:

The economic theory of perfect competition was born in the latter half of the 19th century when, arguably, this market structure was ripe and homogenous products were the norm. In the 20th and 21st century fewer and fewer industries can be said to be perfectly competitive, so a number of theories of imperfect competition have been advanced to explain the behaviour of firms – resulting in our ‘spectrum of competition’.

A pure monopoly is a single supplier in a market. For the purposes of regulation, monopoly power exists when a single firm controls 25% or more of a particular market.

Monopolies can form for a variety of reasons, including the following:

Perfect competition can be used as a yardstick to compare with other market structures because it displays high levels of __economic efficiency and is the closest thing we have to a level-playing field. __

We assume that a perfectly competitive market produces homogeneous products – in other words, there is little scope for innovation designed purely to make products differentiated from each other and allow a supplier to develop and then exploit a competitive advantage in the market to establish some monopoly power.

A contestable market provides the discipline on firms to keep their costs under control, to seek to minimise wastage of scarce resources and to refrain from exploiting the consumer by setting high prices and enjoying high profit margins. In this sense, competition can stimulate improvements in both static and dynamic efficiency over time.

The equilibrium point where demand meets supply will be the point at which the cost of an extra unit just matches the utility (satisfaction) it offers, which means that the ideal quantity of scarce resources are used for the product. The situation is summarised in the diagram below:

Should demand for the product increase, the demand curve would shift to the right and the ‘price signalling mechanism’ would occur. High prices show profits to be made and thus supply would increase to the market as well (existing firms increase output and new firms are attracted). As a result, supply shifts to the right too which is the market mechanism at its best with things returned to an equilibrium once more offsetting the initial price rise and returning things to a ‘normal profit’.

The Advantages of Monopolies

Monopolies can be defended on the following grounds:

The Disadvantages of Monopoly to the Consumer

Monopolies can be criticised because of their potential negative effects on the consumer, including: 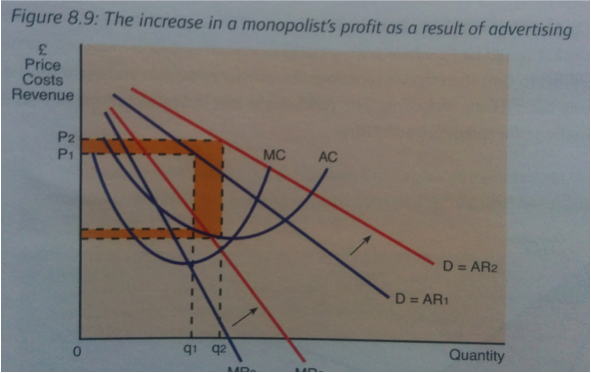 Oligopolies and their importance

Most markets are said to be imperfectly competitive. A few are monopolistically competitive (e.g. hairdressers, plumbers etc.,) but the majority are concentrated markets, dominated by a few suppliers – i.e. an oligopoly. Therefore the theory on the market structure of an oligopoly is arguably the most important of the theories of the firm.

For an industry to be classified as an oligopoly there must be two key aspects of its market structure:

The theory of monopolistic competition makes almost the same assumptions as that of perfect competition – the key difference being that products are differentiated and thus branding is important!

Differences in products create scope for brand loyalty, therefore a consumer might be willing to pay a higher price for the product of one firm compared to another in the market (e.g. Tony and Guy vs Marden’s barber!). Therefore, monopolistically competitive firms are not price-takers (unlike perfect competition where they are and have a horizontal demand curve as a result). Thus each firm is faced with a downward sloping demand (AR) curve. Also, because of the highly competitive nature of the market and the vast array of substitutes available, the demand curve will be much more elastic (i.e. shallow) than it would be for a monopoly (inelastic = steep) market structure.

Relatively few industries possess the above 4 characteristics. Most industries have concentration ratios which would suggest they were oligopolistic in character. However, examples might be local hotels, coach travel, furniture making and, the classic, hairdressers. It is often confusing to students that a market structure with so little monopoly power for the firms is called monopolistic competition. The term ‘monopolist’ refers to the small degree of monopoly power each firm possesses as a result of selling a branded product – e.g. Tony and Guy.

Relatively few industries possess the above 4 characteristics. Most industries have concentration ratios which would suggest they were oligopolistic in character. However, examples might be local hotels, coach travel, furniture making and - the classic - hairdressers. It is often confusing to students that a market structure with so little monopoly power for the firms is called monopolistic competition. The term ‘monopolist’ refers to the small degree of monopoly power each firm possesses as a result of selling a branded product – again, Tony and Guy!