Division of labour - __Production process is split up into different tasks and each worker performs one of these tasks. It is also known as __specialisation.

Let’s think about the advantages and disadvantages to business specialisation.

So specialisation on a business level makes sense. It also makes a lot of sense on an economy to economy level. With international trade, economies become specialised – each producing the things they are best placed to produce. Their advantages may include natural resources, abundant land, cheap labour, scarce skills, climate, deep-water port, university specialism or accessible sources of finance.

A good example is the specialisation of each of the countries within the EU. This specialisation encourages trade between countries thus increasing GDP and standards of living for all! It’s a much better approach than everyone competing (absolute advantage vs comparative advantage is the more formal economic way of phrasing this and is the approach your textbook takes, but it’s worth noting this is not on our spec).

When you start to think about international trade, you see at once that economies become specialised – each producing the things they are best placed to produce. Their advantage may include natural resources, land, cheap labour, scarce skills, technical know-how, a favourable climate, beautiful scenery, a deep-water port, universities or accessible sources of finance.

Trading blocs are becoming an increasingly important feature of the global economy, being in a trading bloc encourages specialisation and open up new markets! The benefits of collaborating with your neighbours is becoming clear. It also means economies of scale and the costs/prices will fall, giving consumers greater purchasing power and higher standards of living. There are two main types of trading blocs – free trade areas and common markets.

Free trade areas – groups of countries that trade completely with each other, with no trade barriers. But each member country has its own independent trade policies in relation to the rest of the world. E.g. ASEAN and NAFTA. Consumers in Canada/US have benefited from highly competitive imports from Mexico. NAFTA has created jobs in all 3 countries.

Common markets – free trade internally and a single unified trade policy covering all member countries’ trade with the rest of the world. E.g. Germany’s trade policy with China is the same as France’s – for they both have the same trade policy adopted by the EU as a whole – indeed all 28 members are represented at the WTO by one seat called ‘The EU’. There is also free movement of labour/capital as well as goods/services. As the UK is a member of the EU – you are free to live and work in any of its countries as well as invest/start-up a business. Why do you think the USA only wanted to be in a free trade area with Mexico/Canada and not a common market??

The European Union is in fact a massive single common market. It has 500 million consumers and undoubtedly has increased trade between its members. There are now very few barriers to trading goods remaining within the EU. The single market idea was to create a level playing field, so that competing businesses would face similar requirements wherever production is located and wherever they were selling their product, within the whole of the EU. Another objective was to enable free work and free investment. This would require recognising all of the member countries’ qualifications and for all EU governments to allow FDI into and out of their economies. As can be imagined, this is an ongoing process.

Single market – barriers to goods/services, people and capital have gradually been reduced, making it more like a single economy. 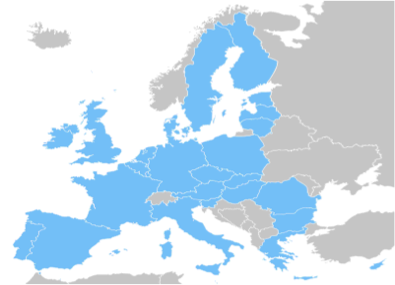 It started as the EEC in 1957 with 6 member countries – Belgium, France, Germany, Italy, Luxembourg and the Netherlands. The UK joined in 1973. Progressively it has got bigger and bigger – with many Eastern European countries joining in 2004 and many more prospective countries wanting to join (Macedonia, Iceland and controversially Turkey).

Many new opportunities have been created by the EU. It has enabled Eastern European countries to grow faster since 2004. But it also opened up new markets for the original 15 members, including the UK. It has provided a choice of locations where lower cost labour is readily available. There have also been changes in it s organisation and efforts to make it more democratically accountable through creating its own political institution in Brussels.

12 MIN TASK – read the next two sections and highlight ‘benefits of the EU’ in one colour and ‘drawbacks’ in another. Utilise them as a basis to complete the next activity.

Harmonisation and the single market

Harmonisation is important as it leads to most regulatory controls on business being common across the EU. For example, labour laws that require employers to avoid endangering their employees would raise production costs. But if ALL the competing businesses within the EU have to stick to the same rules, then none of them are disadvantaged!

Similarly safety requirement for products would be standardised. Thus businesses can create a standardised product and sell it right across the EU, rather than having to make slightly different products to suit each national market. This level playing field makes possible long production runs and economies of scale.

All businesses in the EU have to abide by EU competition law, as well as the laws of their own country. This prevents unfair competition, especially market sharing agreements that allow certain businesses to fix prices higher than what they would be if it was a fair competing market (recently Tesco has been fined £10 million for this in regards to milk prices!). This has had a significant effect on competition and led to lower prices for better quality products – an important benefit for consumers in the EU.

The single market involved the end of border controls on traded goods. This vastly reduced paperwork and delays. The single market has undoubtedly led to the integration of EU economies. However harmonisation has not extended to a unified tax and benefit system. It would be very difficult to attain an agreement with all EU members on this. Some analysts say that because the EU is not 100% unified on all aspects, it has contributed to why some countries are enjoying resounding success (such as France and Germany) but others are having major problems (such as Greece, Portugal and Ireland) and as a result these heavily debted countries are effectively bringing down the EU as a whole.

So there are still very real differences between member countries. Ireland for example pays higher unemployment benefits (95 euro per week!) than the UK (£65). This may mean that incentives to work are less strong in Ireland than the UK and may in part explain why it had a higher unemployment rate in the GFC years (14% compared to 7.7%).

Constraints on the EU

Getting 28 countries to agree can be difficult! Compromises have to be made and inevitably not all governments like all aspects of EU policy. There are also issues surrounding the extent of democratic control over the European Commission (analysts might argue that Germany and France are very much so in the driving seat). There are still many barriers to free trade within the EU, particularly in the highly valuable service sector.

Individual member countries regulate their service sectors very tightly, often protecting them from competition. The EU president has argued that such incidents are preventing this single market fulfilling its potential. Though many member countries still do not want to encourage further integration within the EU economy (political opinion is very much against this in the UK).

Some economists argue that the UK would be better off outside the EU. This could be true – Norway and Switzerland do quite well outside it with very very strong currencies. Both countries adhere to EU regulations with product safety etc., in order to allow for trade. They live comfortably with the requirements of the EU. However they are both small countries, and the UK is not. If the UK was to leave the EU – the political ramifications would be severe and the UK would probably be worse off!! Time will tell what will happen post BREXIT in March 2019.

The EU has a common external tariff (CET) which means that all member countries levy import duties on imports from the rest of the world at the same rates. The EU negotiates as a single entity in WTO negotiations. Import controls for all EU member states have been progressively put in line with WTO agreements.

Free trade within the EU creates fertile conditions for trade creation. Businesses have more choice as to where they buy their inputs and where they sell their products. A larger market also means increased production and economies of scale, leading to lower prices. These will enlarge their markets further. In this way, trade is created.

The CET leads to another important feature of trading blocs – trade diversion. Tariffs make competing imports from outside the trading bloc more expensive, thus buyers will choose products from within EU member states. Trade will tend to be diverted, away from non-member countries. For example, agricultural products have most definitely had reduced imports from non-EU food exporting countries.

What about the Euro?

The advent of the euro has moved the Eurozone much closer to being a genuine single market.

It does have advantages:

- No foreign exchange deals are needed in order to trade, reducing transaction costs (commission for foreign currency exchange or bad exchange rates at the bank).

Some might argue that is why Greece failed, because fiscal (tax) policy is still controlled by the individual countries. Some might also argue that if the UK remains in a long recession and the Eurozone rockets again, that we might crawl into the Euro currency yet. Though given the national debt of Greece this might not be a very attractive option for some time yet. And given our national debt they might not welcome us!

There are convergence criteria which have to be satisfied for each country applying to join the Eurozone. These relate to fiscal policy & government borrowing, to ensure that individual economies don’t have wildly different inflation rates.

In the 1950s tariffs on manufacturers were on average around 25%. By 2004 this had become 3.5-4% which benefits all economies! The hard work of the WTO is a significant factor, but so is the rise of trading blocs thus they are definitely an economic feature that is here to stay – e.g. the ‘transatlantic trade and investment partnership’ (TTIP) – a free trade agreement between the US and The EU – the world’s two largest economies.

Impact of cheap imports on standards of living

Question: Evaluate (so look at both sides of the argument!) the impact of cheap imports on competition, consumer choice and living standards in the UK economy (think in the short term and long term here!). E.g. cheaper labour or cheaper goods, such as shoes made in China.

Question: Evaluate the implications of an over-dependence on imported goods to the UK economy (domestic producers, inflation and employment). E.g. China’s economy goes bust and we no longer have cheap Chinese imports on our shelves.