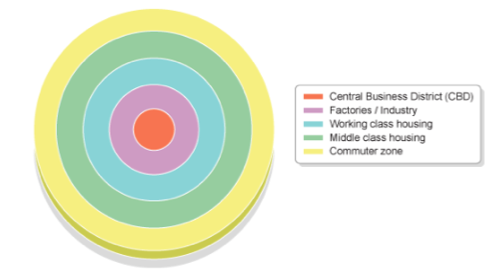 This model is based on the idea that land values are highest in the centre of a town or city. This is because competition is high in the central parts of the settlement. This leads to high-rise, high-density buildings being found near the Central Business District (CBD), with low-density, sparse developments on the edge of the town or city.

The model is now quite old and was developed before the advent of mass car ownership.

New working and housing trends have emerged since the model was developed. Many people now choose to live and work outside the city on the urban fringe - a phenomenon that is not reflected in the Burgess model.

Every city is different. There is no such thing as a typical city.

The Hoyt model is based on the circles on the Burgess model, but adds sectors of similar land uses concentrated in parts of the city. Notice how some zones, e.g. the factories/industry zone, radiate out from the CBD. This is probably following the line of a main road or a railway. 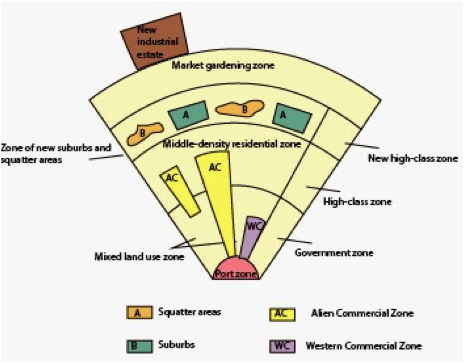 This model was developed in 1967 by T.G. McGee. McGee studied several cities in Southeast Asia and discovered that they shared certain aspects of land-use. Some similarities include: