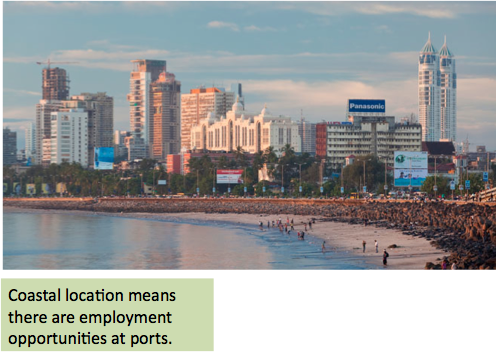 Lots of people in Mumbai are employed in the informal economy. This is where there is no regular wage but often ‘cash-in-hand’ for people providing goods and services. There’s no contract and no health and little protection.

Many people who work in Mumbai’s informal economy live in slums of which Dharavi is the largest. The poor people here have created opportunities for themselves however- creating business in Dharavi worth over £350million a year.

TNCs meant that foreign companies began to invest in Mumbai’s finance and I industries, bringing more international migrants to live and work in the city.

There has also been a boom in the service sector for low-skilled people in Mumbai. They provide services to other Mumbai residents- taxi services, hairdressers, waiters, street vendors etc.

As a result, employment is the main opportunity and pull factor for people moving to Mumbai. Even though the working conditions are often very basic, everyone who comes to Mumbai looking for work has a good chance of finding a way to earn money.

Even in the slums of Mumbai, people have access to resources and services that they would often not be able to access in rural locations. All the different types of people in Mumbai are therefore able to benefit to some extent from the opportunities of living in a mega city.

The informal economy are jobs outside of formal employment, which are not projected by rights, holiday pay, good working conditions as well as being outside of government tax. 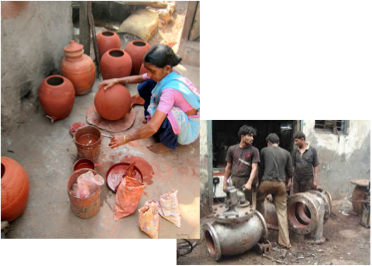 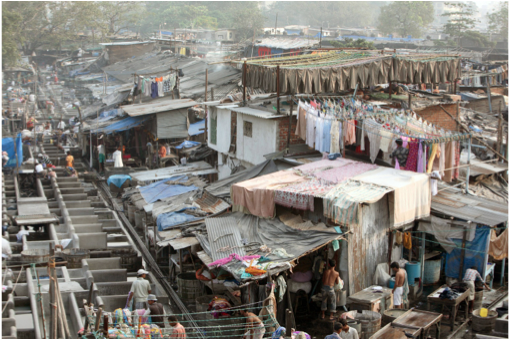 Housing. Slums come with many issues for people including the lack of planned access to clean water and sanitation systems, poor health, lack of education, unemployment and the prospect of crime. One of the world’s most infamous slums is the Dharavi slum, which is the largest squatter settlement located in Mumbai (formerly Bombay) in India. There are a million people crammed into one square mile in Dharavi. At the edge of Dharavi the newest arrivals come to make their homes on waste land next to water pipes in slum areas. They set up home illegally amongst waste on land that is not suitable for habitation. In the wet monsoon season these people have huge problems living on this low lying marginal land.

Waste – Mumbai produces 7,500 metric tonnes of waste every day, a huge amount. There is no comprehensive city based system of collection and this waste poses a hazard to human health. The slum of Dharavi has a recycling zone. It is claimed that Dharavi’s recycling zone could be the way forward to a sustainable future. Everything is recycled from cosmetics and plastics to computer keyboards. 23% of plastic waste gets recycled in the UK, in Dharavi it is 80%. Despite this Mumbai still has major problems getting rid of its waste.

Lack of access to clean water – there are few water pipes in the slum and those that exist only have the supply switched on for 2 hours a day by the city authorities. This means people have to queue for water and have LIMITED SUPPLY. In addition, next to the open sewers are water pipes, which can crack and take in sewage. Dharavi slum is based around this water pipe built on an old rubbish tip. Water pollution is a major problem in Mumbai. A major study revealed that 77% of households suffer from poor water quality in the city. This poor water quality is leading to water borne diseases occurring in people and levels of things like total dissolved solids (TDS) and nitrates are higher than safe limits. Toxic chemicals such as arsenic and lead and disease-causing bacteria are also contributing to the alarming increase in the water contamination. Deadly waterborne diseases like cholera, jaundice, typhoid, diarrhoea are affecting people as a result.

Government issues with getting out of these problems: