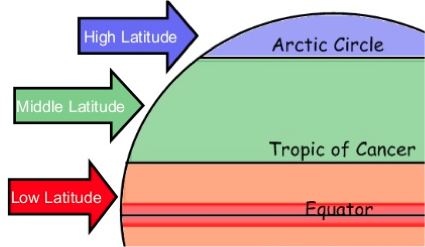 It is commonly thought that the sun is overhead at the equator all year round, this however is not true.

Northwards, when we have our summer solstice (longest

This means the ITCZ is also going to travel north and south through out the year. This means the heavy rain showers on the West coast of Africa are very seasonal.

The greatest amount of rain falls across the coast of West Africa. Here rainfall can exceed 2000mm per year. The further north you go, the less rain, so in the Sahara desert there is less than 250mm per year. 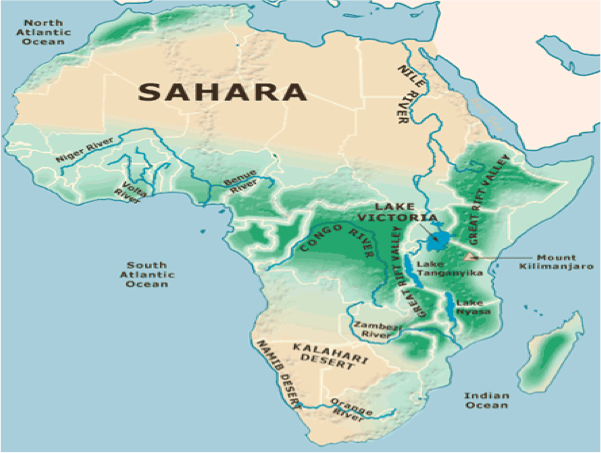 Along the coast, rain falls in every month, because it has an equatorial climate. But just north of the coast there is one month dry season.

The dry season becomes longer the further north you go.

So in Nigeria, it is 9 months and in the Sahara it is 12 months 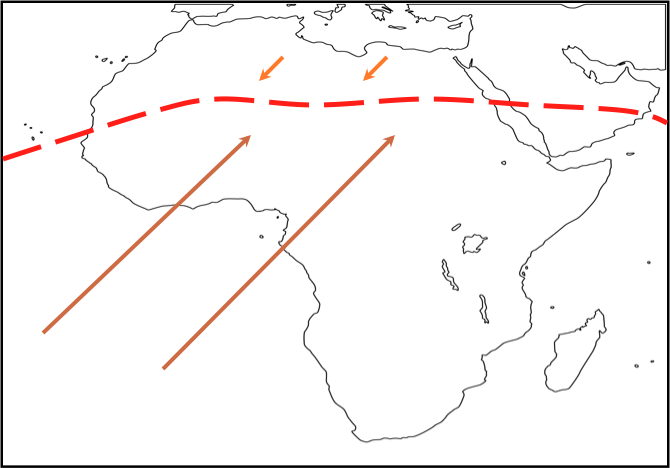 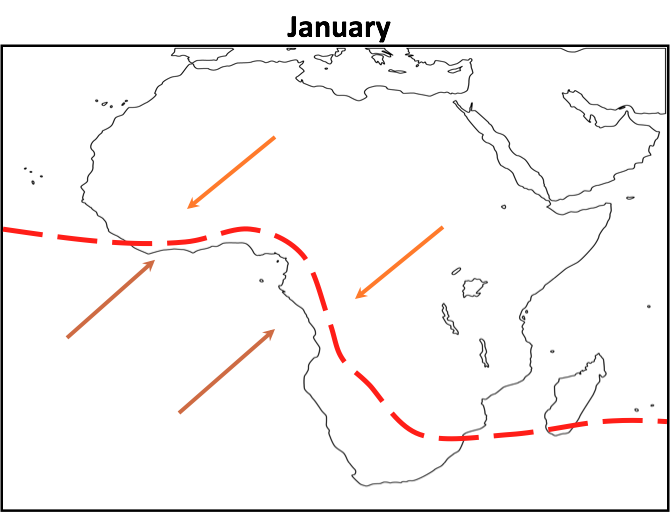 Atmospheric circulation is the movement of air around the Earth to try and balance the temperature. This is done in part by the Tri-Cellular Model. Air is different temperatures around the world (because the sun shines most at the equator and less at the poles). This creates areas of either high or low pressure that circulate around the globe. 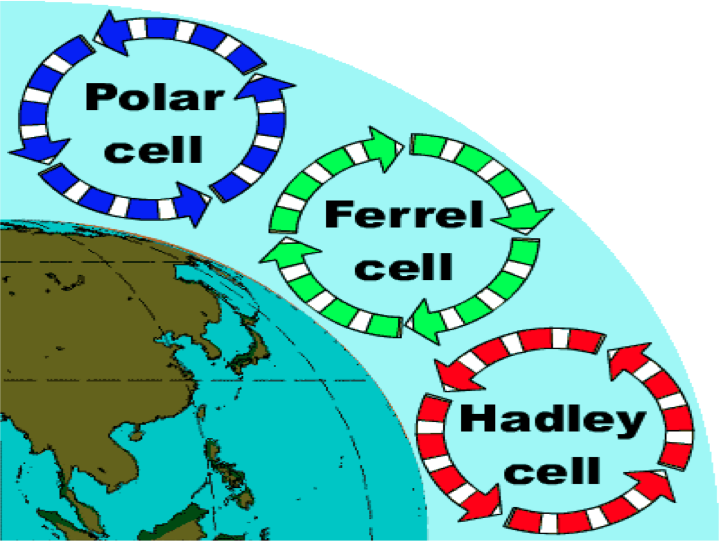 Air pressure is the weight of the air pressing down on the earth’s surface.

As the sun heats the earth this creates warm air. This air is less dense and rises, creating areas of low pressure.

In areas where air is colder, it is more dense and creates areas of high pressure. 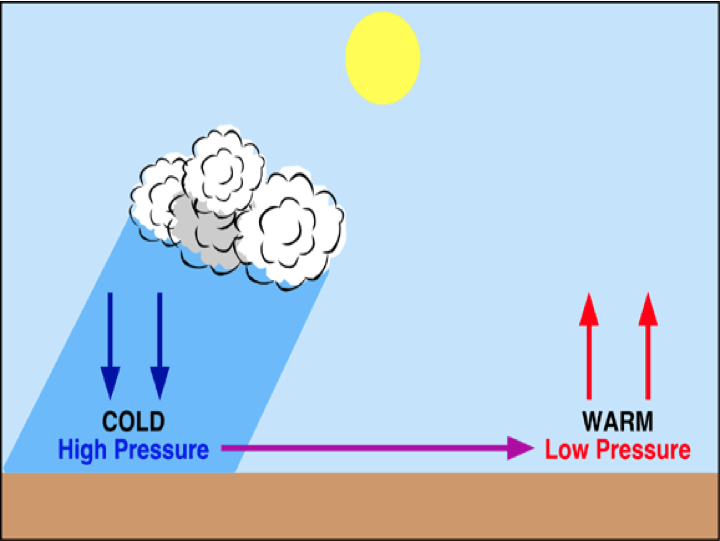 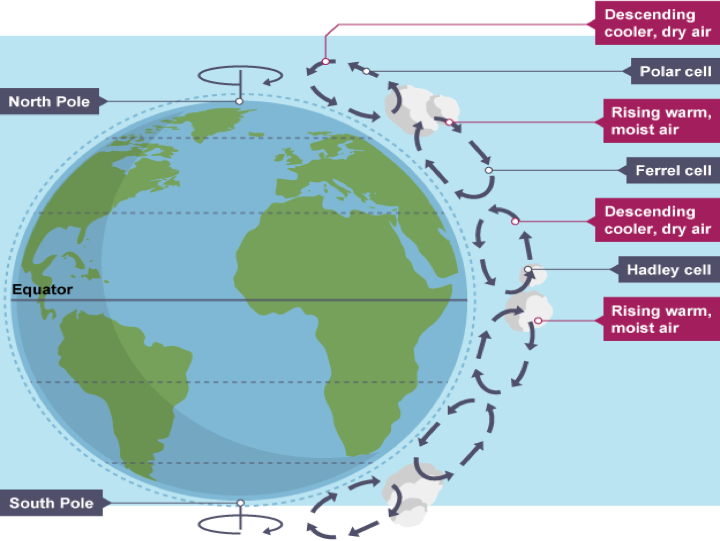 The effect of this air sinking or rising creates two pressure belts across the globe.

The point at which the Hadley Cells converge shifts during the year. This is called the INTER TROPICAL CONVERGENCE ZONE (ITCZ) and affects which places get monsoon rains or dry seasons. 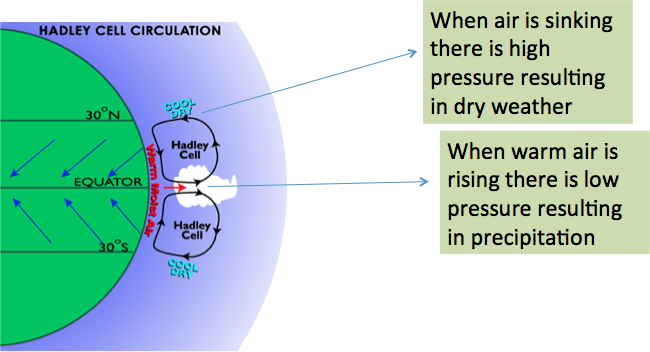 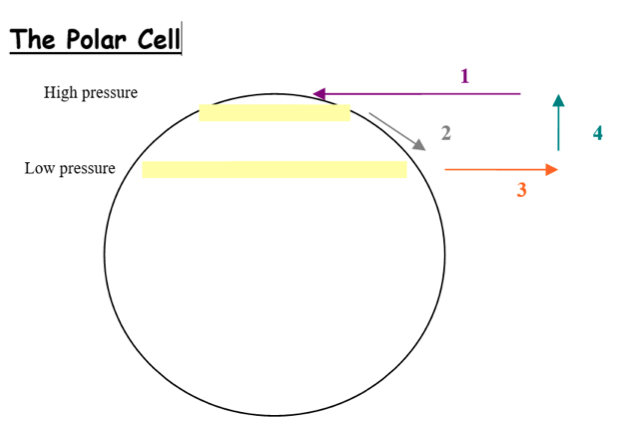 Similar to the Hadley Cell the Polar Cell creates two bands of low and high pressure.

This is a response to the other two cells. This cell feeds warm air to high latitudes and transfers cold air back to the subtropics for warming.

Global winds blow from high to low pressure. The earth is constantly rotating and deflects winds to the right in the Northern Hemisphere and to the left in the southern hemisphere. This is called the Coriolis Effect. 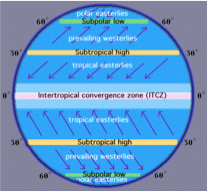 Ocean currents are movements of surface water. How the world’s oceans move has a huge influence on our climate as oceans cover 67% of the earth’s surface. Therefore oceans receive 67% of the sun’s energy that reaches earth. Like atmospheric circulation, ocean currents help to redistribute energy across the earth. The worlds oceans hold on to heat from the sun for longer than the land does, and the ocean currents move this heat around, from the tropics (low latitudes) to higher latitudes (The Artic). In total, ocean currents transfer about 25% of the global heat.

In the Atlantic and Pacific oceans, the currents make a similar pattern

Flowing away from the Equator:

Ocean currents flowing away from the equator are called warm currents - they aren’t necessarily warm, just warmer than water at that latitude. Eg: The Gulf Stream.

Flowing towards the Equator:

If a current flows towards the equator it is a cold current. Eg; Canaries current