It’s been estimated rainforests once covered 14% of the earth’s surface but this has reduced to 6% and they may disappear altogether within 40 years. Humans intervene with rainforests to bring real or imagined benefits to themselves or the local population. Valuable minerals lie under the rainforest and land is often cleared for farming, minerals and logging. This is called deforestation. Not only wildlife destroyed but erosion and flooding occur too.

Better transportation means easier access to raw materials like minerals and timber. Forest resources can be transported away and sold

Five years ago there were an estimated ten million tribesmen living in the rainforest, today there is estimated only 200,000

Selling resources can be used to improve a country’s infrastructure

Farming, transportation and mining can lead to deforestation. Hardwood tree take many years to grow so can be difficult to replace

That make farming possible are quickly washed away when the forest is cleared. If soil ends up in rivers it can lead to flooding

Tropical hardwoods such as ebony and mahogany, can be sold for a good price abroad

This occurs when trees are cut down. Deforestation can result in endangering animals and plant life, or even lead to them becoming extinct

Fewer trees means less water is stored in the roots and less water is transpired. Smaller lakes and streams could dry up and the area can become drier and suffer drought.

Soil moisture is no longer protected by forest cover so dries up and nutrients evaporate. Eventually, rain washes down the soil surfaces and erosion takes place.

What Is a Direct or Indirect Threat

Direct threat: clear link between one thing happening and the damage being caused to something else.

Indirect threat: unclear link between one thing happening and the damage that is caused to something else. 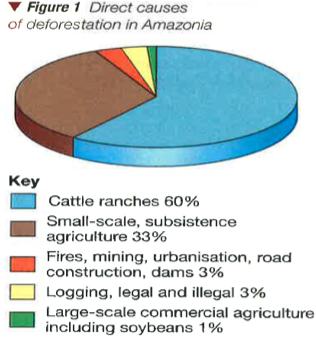 As Climate change leads to warmer temperatures, species must respond if they are to survive. One way to do this is to migrate to new habitats that become suitable (and away from old ones that become unsuitable); another way is to adapt to hotter temperatures, but the speed of climate change may be too fast for some species to evolve to keep up. In some cases, if their structure permits it, species may be capable of tolerating increases in temperature, but the likelihood of this is unknown.