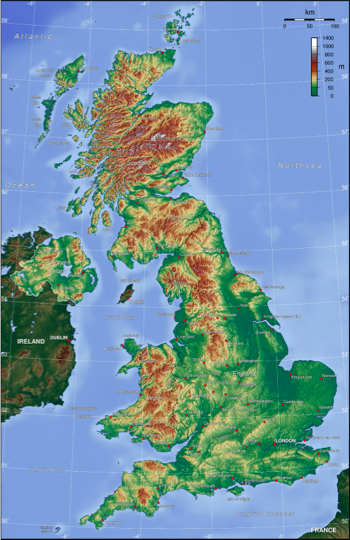 From the map we can see that brown areas (uplands) and green areas (lowlands) form a pattern.

Upland areas are mainly found in:

Lowland areas can be found in the following places:

These differences in relief are partly formed by the last ice age. For example the Pennines were affected by glaciation. Rivers eroded into the uplifted Pennines, creating V-shaped valleys. 10,000 years ago during the last Ice Age, glaciers covered the Pennines and altered the river valleys by making them deeper and wider, scouring the landscape with their great weight, creating U-shaped valleys. As the glaciers retreated and melted they left materials such as Boulder clay and features such as Malham Cove

Igneous rocks can be found mainly in upland areas in Scotland, in the Lake District in North West England and Snowdonia in North Wales and Northern Ireland. 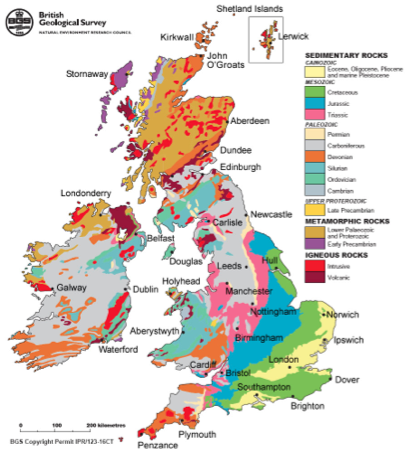 Metamorphic rocks are found in Northern Ireland and Scotland.

Sedimentary rocks can be found across lowland areas of southern and central parts of England.

A river carries, or transports, pieces of broken rock as it flows along. When the river reaches a lake or the sea, its load of transported rocks settles to the bottom. We say that the rocks are deposited. The deposited rocks build up in layers, called sediments. This process is called sedimentation.

The weight of the sediments on top squashes the sediments at the bottom. This is called compaction. The water is squeezed out from between the pieces of rock and crystals of different salts form.

The crystals form a sort of glue that sticks or cements the pieces of rock together. This process is called cementation.

The inside of the Earth is very hot - hot enough to melt rocks. Molten (liquid) rock forms when rocks melt. The molten rock is called magma. When the magma cools and solidifies, a type of rock called igneous rock forms.

Igneous rocks contain randomly arranged interlocking crystals. The size of the crystals depends on how quickly the molten magma solidified. The more slowly the magma cools, the bigger the crystals.

If the magma cools quickly, small crystals form in the rock. This can happen if the magma erupts from a volcano. Obsidian and basalt are examples of this type of rock. They are called extrusive igneous rocks because they form from eruptions of magma.

Unlike sedimentary rocks, igneous rocks do not contain any fossils. This is because any fossils in the original rock will have slowly melted when the magma formed.

Earth movements can cause rocks to be deeply buried or squeezed. As a result, the rocks are heated and put under great pressure. They do not melt, but the minerals they contain are changed chemically, forming metamorphic rocks.

Sometimes, metamorphic rocks are formed when rocks are close to some molten magma, and so get heated up.

When a metamorphic rock is formed under pressure, its crystals become arranged in layers. Slate, which is formed from shale, is like this. Slate is useful for making roof tiles because its layers can be split into separate flat sheets.

These three types of rock are constantly changing through weathering, erosion and heating and cooling. This is called the rock cycle. 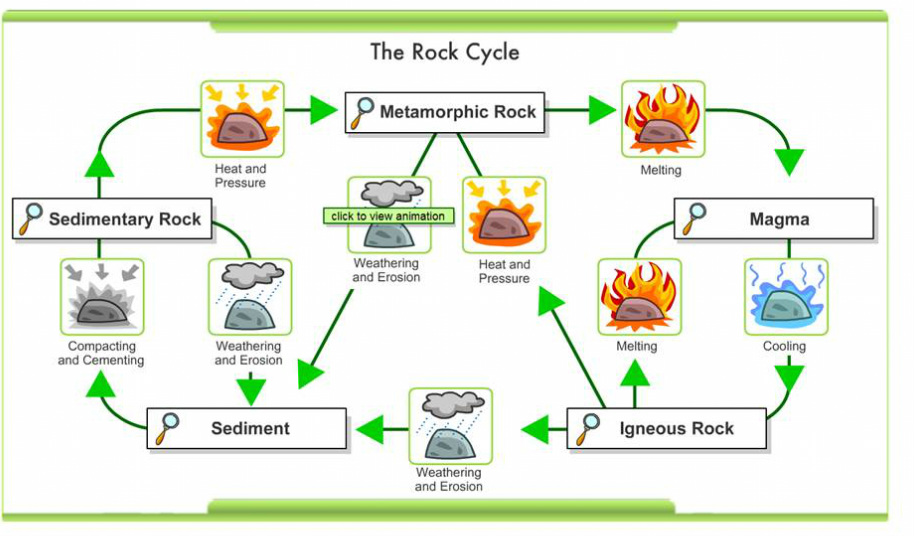 Batholith, large body of igneous rock formed beneath the Earth’s surface by the intrusion and solidification of magma. It is commonly composed of coarse-grained rocks (e.g., granite or granodiorite) with a surface area of 100 square km (40 square miles) or larger. A batholith has an irregular shape with steep side walls. Most batholiths form across mountain folds. A well-known batholith is located in the Sierra Nevada range of California, U.S. 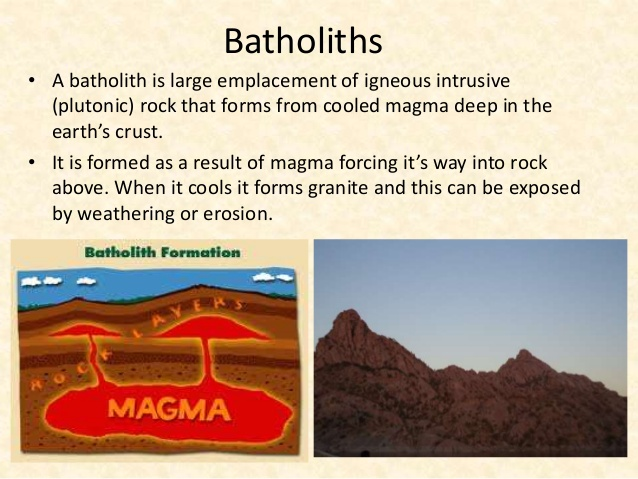