What are the reasons behind these natural changes in climate? There are three theories that scientists use to explain the causes of temperature rise and fall.

Over very long timescales, there have been big changes in climate. Cold glacial (icy) periods and ice ages were 5-6°C colder than today. Such big changes need a big cause. Scientists think they know what it is – changes in the way the Earth orbits the sun. 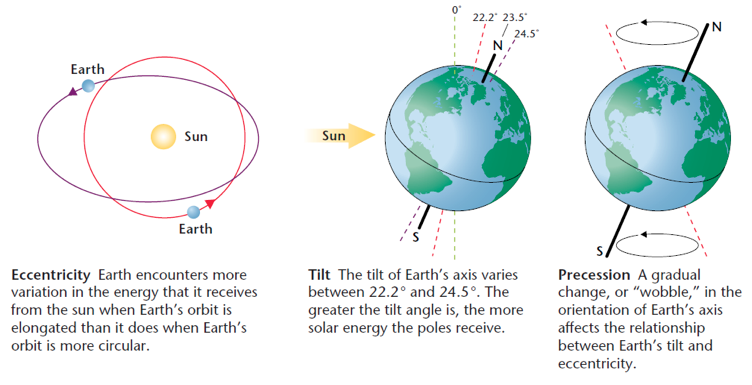 These three changes alter the amount of sunlight the Earth receives. They also affect where sunlight falls on the Earth’s surface. On timescales of thousands of years, the changes would be enough to start an ice age, or end one. There changes are called Milankovitch Cycles.

The Sun’s output is not constant, and cycles have been detected that reduce or increase the amount of solar energy. Over 2000 years ago Chinese astronomers started to record sunspots. These are black areas on the surface of the sun. Sometimes the sun has lots of these spots. At other times they disappear. Dark spots mean lots of solar energy, and lots of spots mean a lot more solar energy being fired out from the sun towards Earth.

Cooler periods, such as the Little Ice Age, and warmer periods, such as the Medieval Warm Period, may have been caused by changes in sunspot activity. Some people think that there were more volcanic eruptions during the Little Ice Age, and that this added to the cooling. However, a 1-2°C change cannot be explained by volcanoes – but it might be explained by sunspot cycles.

Big, explosive volcanic eruptions can change the Earth’s climate (not small ones). Volcanic eruptions produce ash and sulphur dioxide gas. If the ash and gas rise high enough, they will be spread around the Earth in the stratosphere (2nd layer of the Earth’s atmosphere) by high level winds. This creates a blanket of ash and gas which will stop some sunlight reaching the Earth’s surface. Instead, the sunlight is reflected off the ash and gas, back into space. This cools the planet and lowers the average temperature.

In 1991, Mount Pinatubo in the Philippines erupted, releasing 17 million tonnes of sulphur dioxide. This was enough to reduce global sunlight by 10%, cooling the planet by 0.5°C for about a year. Mount Pinatubo was very small-scale compared to the 1815 eruption of Tambora in Indonesia. This was the biggest eruption in human history. In 1816, temperatures around the world were so cold that it was called ‘the year without a summer’. Up to 200 000 people died in Europe as harvests failed. The effects lasted for four to five years. Sunlight reaching earth was reduced by 10%. 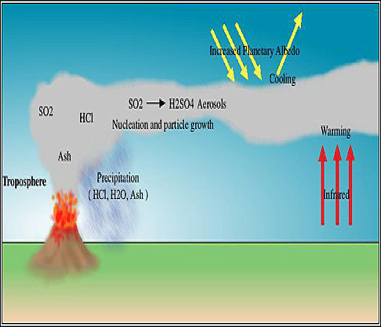