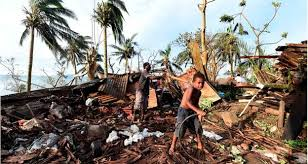 The storm developed in early March, making landfall between 13-14 March 2015.

The cyclone hit the islands of Kiribati, Tuvalu, the Solomon Islands and Vanuatu. It was in Vanuatu where the worst impacts were felt.

Pam started as two separate storms before combining and growing into a tropical cyclone. The storm gained energy from the warm waters of the South Pacific The flow of warm, rapidly rising air produced an area of extreme low pressure at the centre. The Coriolis effect will have also contributed to the spinning of the storm.

According to the United Nations, a total of 16 people were killed. In the immediate aftermath, media outlets indicated unconfirmed reports of 44 casualties in the many villages destroyed by the storm however, these claims were never substantiated.

Communication across the country was crippled, with only one cellular tower in Port Vila remaining operational. The power grid was devastated as well. Four days after the storm, nearly 60 of the nation’s inhabited islands remained cut-off from the outside world.

What were the responses?

The response to Tropical Cyclone Pam began immediately after the storm left Vanuatu’s borders. In the 12 months since the event, more than 50 organisations, both local and international, have worked together under the lead of the Vanuatu Government to ensure relief efforts are coordinated and aid is getting to those who need it most.

Water, sanitation and hygiene kits have been provided to families in evacuation centres. UNICEF has delivered some 2,800 water containers to Tanna, as well as purification tablets and soap. Although 1,400 shelter kits have arrived in-country, an estimated 12,000 kits and 24,000 tarpaulins are urgently required.

Initial agriculture damage estimates indicate significant losses to crops and livestock. Food security will be an issue so people can rebuild their lives.

On the one year anniversary of Cyclone Pam, aid organisations on the ground in Vanuatu continue to roll out drought assistance along with its post-cyclone response, even as other catastrophes strike the region. 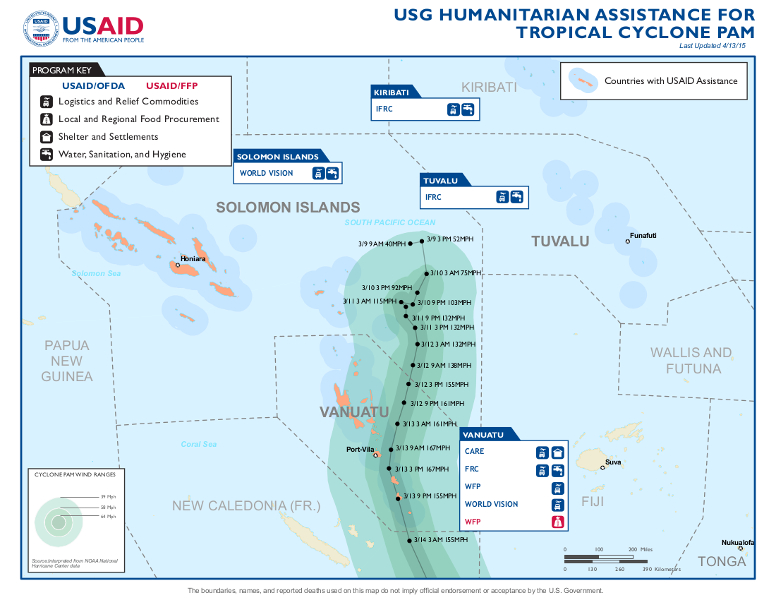